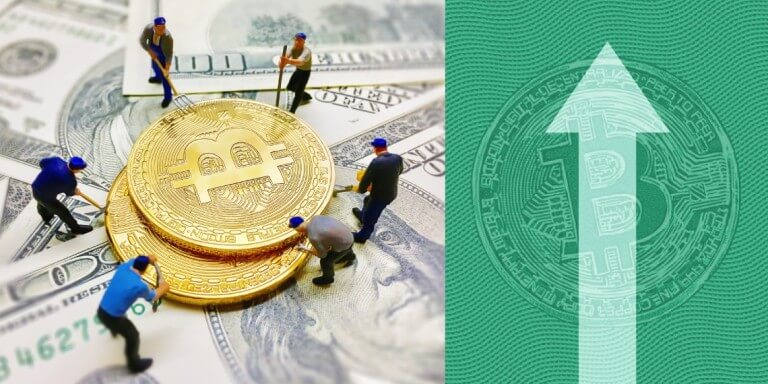 Bitcoin miners have been getting back to work as the cryptocurrency market stages a comeback. Following the resurgence of Bitcoin (BTC), many bitcoin miners have turned on their rigs and are mining again in search of profits.

The difficulty of mining cryptocurrency, as measured by the total amount of computing power needed to produce Bitcoin, recently jumped more than 10% in the most recent two-week period according to numbers from crypto miner BTC.com.

This suggests that miners are plugging their computer hardware back in, hoping to capitalize on Bitcoin’s rising market value. Unfortunately, this comes after a long period of depressed coin prices and high costs for energy – which has caused even major mining companies to struggle with debt and face possible bankruptcy.

The leading digital asset by market capitalization has risen by 16% in the past seven days at press time, making it its strongest weekly performance since February of last year.

The token is also on track to reach its longest winning streak since November 2013. BTC even brushed over $21,500 momentarily. This surge in value highlights the ongoing resurgence and strong interest being shown in cryptocurrencies.

Over the past twenty-four hours, however, BTC has seen a tumble in price, bringing it to $20,820 at press time. This might be a reaction to news of little-known exchange Bitzlato getting shut down and its founder arrested.

Bitcoin miners have been struggling for the past year

Mining is a vital component of the Bitcoin network, and miners are responsible for validating the transactions on the blockchain and receiving rewards in the form of tokens.

To ensure smooth operations, public mining companies have invested heavily in large-scale data centers and substations that are connected to power grids.

Unfortunately, these companies have found themselves squeezed by falling Bitcoin prices and soaring electricity costs in 2022.

The challenge for miners is to be able to operate efficiently and sustainably in order to remain profitable. To this end, many mining companies have taken steps to reduce their operational costs by investing in energy-saving technologies such as renewable energy sources, energy-efficient cooling systems, and cutting-edge data centers.

Additionally, miners are increasingly relying on innovative financing strategies such as shared mining pools and cloud mining services to offset their expenses and increase returns on investment.

The recent surge in the number of active mining rigs is the second most significant spike since August 2021, according to data collected by btc.com.

This is especially noteworthy due to a decrease in electricity costs during October 2022, as lower temperatures in some of the more popular crypto-mining hubs in the United States – such as Texas – allowed miners to operate more efficiently.