Avalanche Price Analysis: AVAX bounces back from a downtrend at $55, reversal on the sides The Avalanche price analysis is bearish today, as the firm support previously reached after a strong surge earlier today has been exceeded. As a result, we anticipate AVAX/USD to reverse and fall further later today, along with the overall bearish momentum.

The overall market traded mostly in the green over the last 24 hours. Bitcoin gained 1.87 percent. Ethereum gained 5.33 percent, becoming the top performer on the daily chart.

AVAX/USD was last seen trading between $54.73 and $56.59, demonstrating a large degree of volatility in the previous 24 hours. Trading volume has decreased by 22.4%, with transactions totaling $560.9 million, while the overall market capitalization is around $12.72 billion, placing it 14th among all cryptocurrencies.

On the four-hour chart, we may observe Avalanche price action approaching a significant barrier, which is likely to result in a reversal later today. 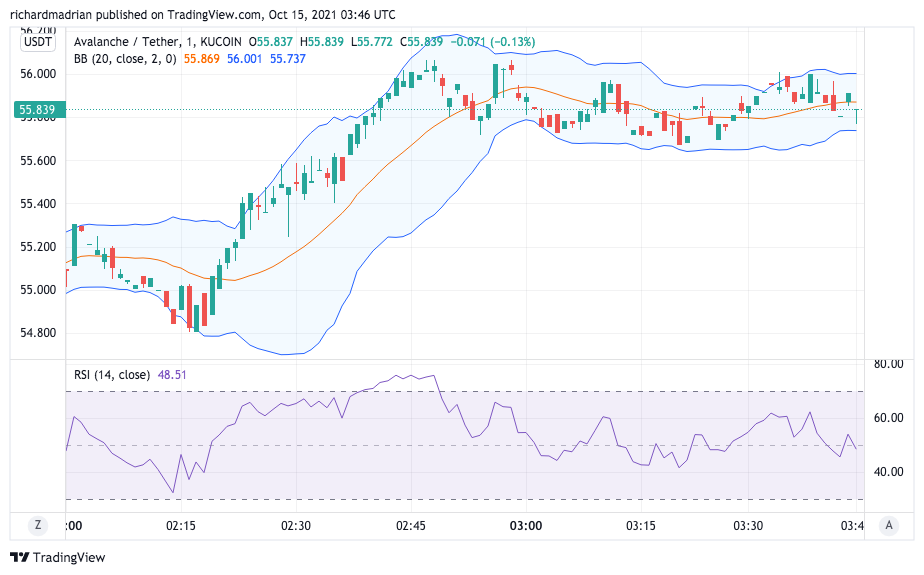 After a strong rise over the second half of September, price action in the Avalanche has fallen back with bearish momentum. Over the past two weeks, several lower lows and highs have been established, pushing AVAX/USD to its current low of $51.

The price of Bitcoin is presently retracing higher, with bulls eyeing another higher low. The previous support at $59 will most likely be tested, and the value will fall further.

If AVAX/USD breaks through the resistance, we could see a significant rise later this week, suggesting that a big reversal to the upside is on the cards. We remain bearish for the Avalanche price and expect it to fall below $50 next.

Today’s price analysis for the Avalanche is bearish, as a crucial barrier was encountered during the previous 24 hours. As a result, AVAX/USD will most likely reverse over the next 24 hours and look to test the $50 support.

While waiting for Avalanche to move further, read our guides on the Best NFT marketplaces, NFT history, and development, as well as NFT Music