Today’s analysis of the Avalanche price shows that it is bullish, with a persistent upside seen over the last 24 hours following a clear higher low during the morning hours. As a result, we anticipate AVAX/USD to continue rising today and test further heights later today.

According to the Coin360 cryptocurrency heatmap, the overall market is trading in the red zone with Bitcoin shedding 2.92 percent and Ethereum dropping by 0.34 percent. The best performer of the day is Solana after it crossed the $200 psychological support.

Avalanche price movement in the last 24 hours: Avalanche consolidates to $65

The market price of AVX/USD swung between $61.55 and $65.28 over the last 24 hours, indicating modest volatility. Trading volume has dropped by 49%, leaving $373 million in trade, while the entire market capitalization is approximately $12.2 billion, placing it in 16th position globally.

The price has certainly shown signs of slowing bearish momentum. It is likely that the bullish momentum will continue to dominate, causing additional gains later today. We can see that Avalanche price action remains controlled by buyers’ momentum on the 4-hour chart, which implies more upsides are forthcoming. 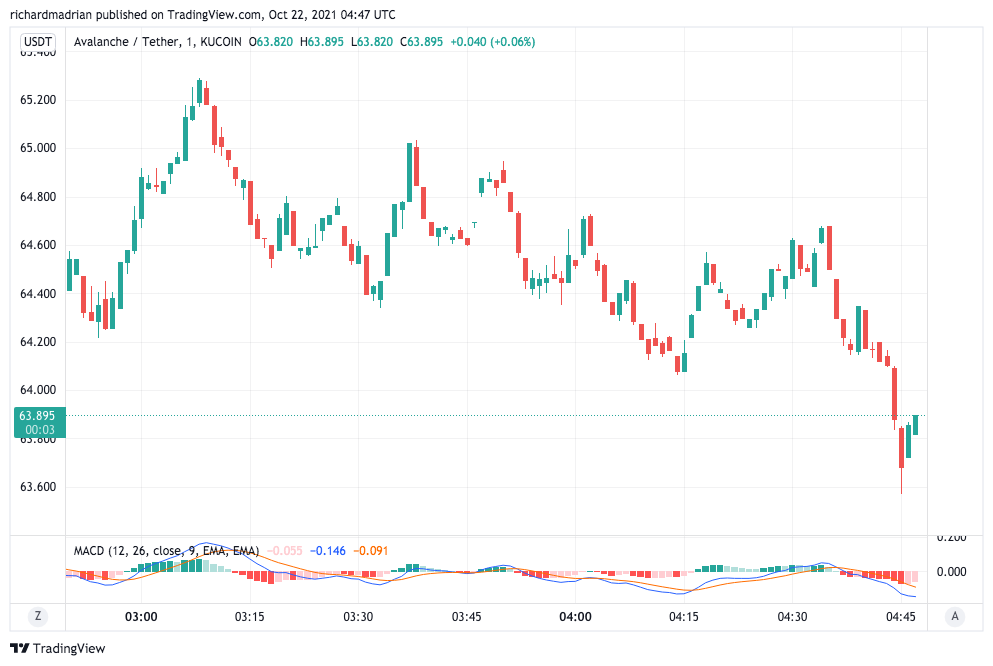 The price of an avalanche is more difficult to measure since it can be triggered by a variety of events. The AVAX/USD pair has been under severe bearish momentum so far in October. After reaching a high of $79.8 at the end of September, AVAX/USD failed to rise further over the following week.

After reaching a high of $62 on Saturday, the AVAX price fell sharply, giving way to a clear reversal that saw it drop over the last 24 hours. Overall, later today, the AVAX/USD pair should continue to fall, with the $50 support level as the next major downside target.

The price of an Avalanche is rising steadily today, as evidenced by a steady gain overnight. As a result, we anticipate AVAX/USD to rise further later today and perhaps go above the $65 mark.