Avalanche Price Analysis: AVAX/USD is bearish for the next 24 hours Today’s Avalanche price analysis is bearish, as the firm support previously reached following a strong upswing earlier today has been surpassed. As a result, we expect AVAX/USD to reverse and fall further later today, in addition to the overall bearish momentum.

Earlier today, Avalanche price analysis indicated bullish momentum had taken over, following an upswing towards $68. However, the price has fallen back down to just above yesterday’s low of $55.7, at $56.8. As a result, we have several reasons for expecting bearish momentum to take hold later today on the daily chart.

Hourly indicators are in bearish mode following the upswing towards $68 earlier today. As a result, Avalanche’s price could be expected to fall back down later today following both resistance levels. The RSI has fallen to a low at $48, which is a sign that the bulls have left the market at the moment. Additionally, we can see that Avalanche price has fallen below both EMA’s and Bollinger Bands indicate bearish momentum will take hold later today. Ultimately, based on current indicators and resistance levels, we could expect AVAX/USD to fall from the current price at $57 towards $52.3 later today, before a slight retracement to find support at around $54.

On the four-hour chart, we may see Avalanche price action approaching a significant barrier, likely to result in a reversal later today. 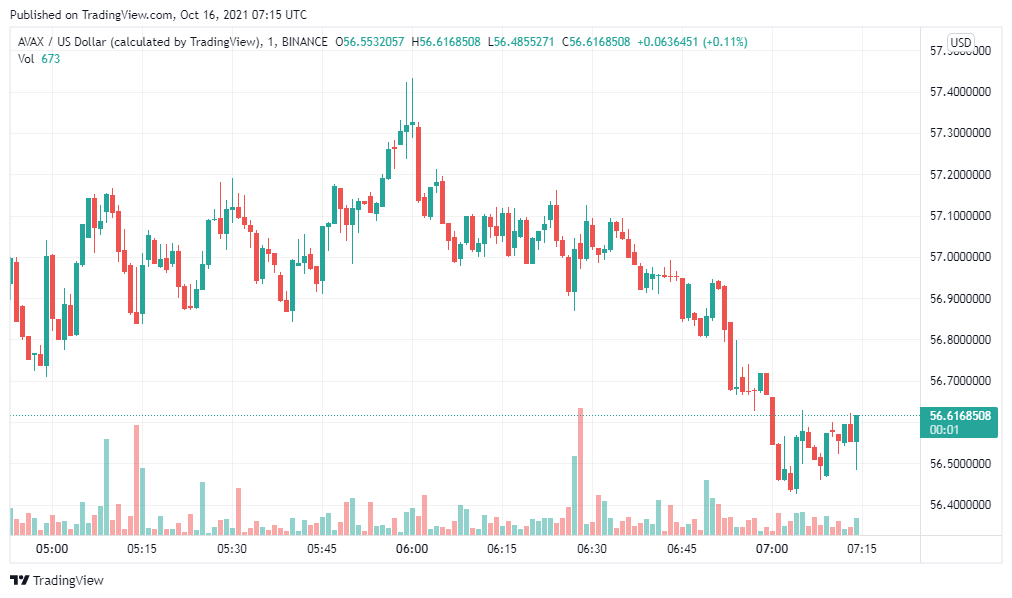 Price action in the Avalanche has fallen back with bearish momentum after a solid surge over the second half of September. Over the previous two weeks, several lower lows and highs were recorded, resulting in AVAX/USD’s current low of $51.

Long-term indicators largely reflect the bearish sentiment shown on the daily chart as well. As we can see from the chart below, Avalanche has been trading within a descending wedge for several weeks now. An impending breakout of the upper resistance of this descending wedge remains more likely than not. Furthermore, Avalanche’s Ichimoku Cloud is also largely bearish on the daily chart. However, the most important reason for expecting the price to turn bearish later on is that Avalanche has once again found support at $50, an area that has proven to be a strong indicator in the past for bearish sentiment.

The Avalanche’s price is bearish today, as a crucial barrier was reached during the previous 24 hours. As a result, AVAX/USD will most likely reverse over the next 24 hours and attempt to break the $50 support.