Avalanche price analysis: AVAX/USD is bullish for the next 24 hours The market is close to the prior swing high of $73, and today’s Avalanche price analysis is bullish. We anticipate even greater gains later today as long as AVAX/USD can keep up its momentum, with a new high possible if it does so.

The price analysis for the Avalanche is bullish, with the market establishing a new higher low and beginning to advance back towards its all-time high. As a result, we expect AVAX/USD to rise even more during the next 24 hours, possibly breaching the $75 previous all-time high.

The last 2 days’ price action shows no signs of bearish continuation, usually when the price moves below the 50EMA, breaking it consecutively on the four-hour and daily price chart charts. This fact helps reinforce our belief that AVAX/USD will continue moving higher during tonight.

AVX/USD has been trading in a range of $52.01 to $65.14 for the last 24 hours, suggesting considerable volatility over the period. The total trade volume has increased by 115.54 percent and is now at $2.13 billion, while the overall market capitalization is about $14.12 billion, according to CoinMarketCap data.

The market has seen the AVX/USD pair retesting a previous swing high of $73.13, marking the top of its current trading range. The last time this price was seen on AVAX/USD was May 4; this level will likely act as significant resistance again on the next leg up.

Despite this, it is important to note that AVAX/USD is still trading above 50EMA and 100 EMA, which seem to be shifting upwards in unison with each other. This suggests that the AVX/USD market will probably see further gains in the next few hours, potentially achieving a new high later today.

On the 4-hour chart, we can observe the Avalanche price action attempting to break past the swing high of $65. 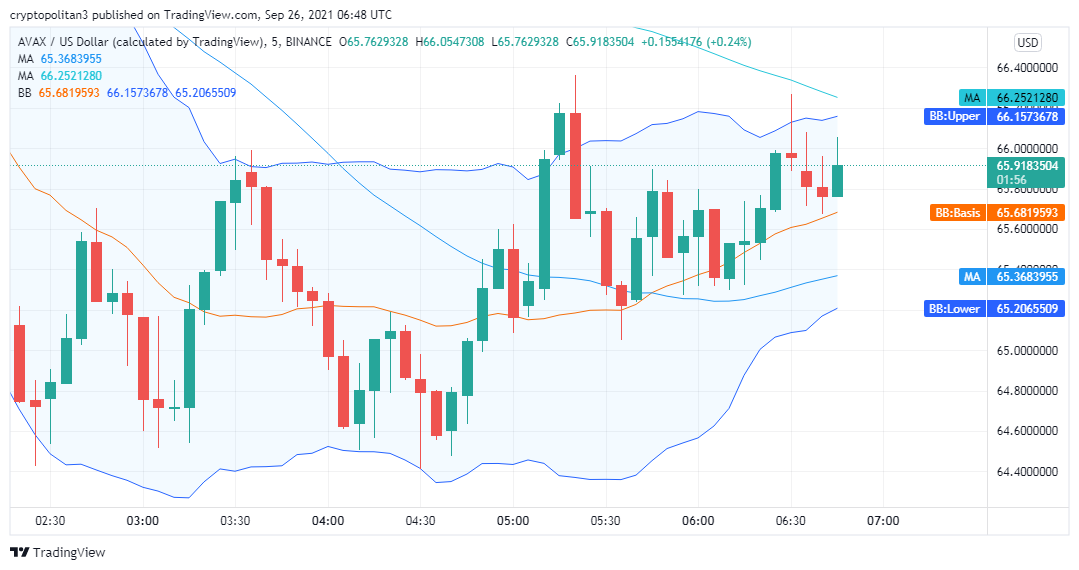 AVX/USD was relatively range-bound in the $64.55 – $68.67 region, with a trading volume of $2.1 billion. The market eventually tested the $80 support level on June 13th and was rejected, leading to a drop. The price fell below the 50EMA and until it met resistance at $76.99, where it found buyers that managed to recoup most of the losses before moving higher again.

This comes after the market had established a new higher low at $53.97 on June 12th. The next few hours of trading should determine whether or not Avalanche bulls will break the $69 resistance and reach a new all-time high.

For today, the price of the Avalanche has been trading within a range from $64 to $68.

The chart reveals that Avalanche has established a new higher low and is now advancing back towards its previous all-time high of $73.13 in the coming hours. A new all-time high seems very likely at this point, with that possibility growing even more if AVAX/USD manages to break past $75 and establish a new swing high.