Avalanche price analysis: We expect AVAX/USD more gains in the next 24 hours The daily Avalanche price chart began the day with the sellers in control of the market. The bulls created solid support at the low end of the day’s trading five minutes later, $51. The prices rose, as a result, forming head and shoulder patterns to the intraday highs of $59, which sellers established. At this point, The sellers established a significant barrier that the bulls could not easily overcome. The strong resistance by the sellers allowed them to dominate the AVAX/USD market, resulting in steep drops.

The two most significant digital assets are trading in losses as the sellers control the entire cryptocurrency space leading to price dips. Bitcoin is down by -6.43 percent, while ETH has dropped by -6.21 percent. Other altcoins are also trading in the same trend, recording massive price deviation. The meme coin has recorded more than -15 percent price decline while Solan is trading at -12 percent. Despite most digital asset trading being bearish, some coins have recorded significant price gains in the last 24 hours. OMG is the hottest gainer of the day, recording 17 percent price surge.

On the 4-hour chart, we can see bulls taking control of the price action for the Avalanche, suggesting that there may be more upsides today. 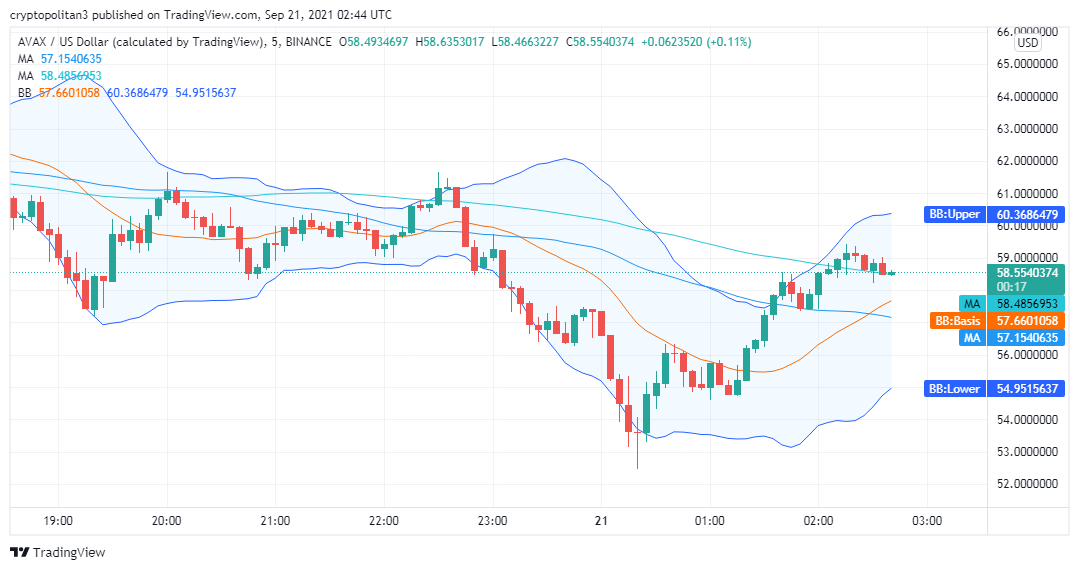 At the moment, the price of the AVAX/USD pair is moving with a lot of bullish force. After establishing a new major swing low around $33 on September 7th, bulls began to push the market upwards.

AVAX, which is the first cryptocurrency to be created by Solidified Informatics, broke through its previous all-time high of $59 and hit approximately $65 at the end of last week. On Wednesday, after retracing to $50, the price movement accelerated toward new heights.

On September 18th, the new all-time high was finally achieved at $75. This price action development was followed by a little retracement late yesterday. On the other hand, Bulls began pushing AVAX/USD higher earlier today, possibly suggesting further gains over the next 24 hours.

On September 18th, the new all-time high of $75 was finally achieved. This price change was followed by a minor retracement late yesterday. On the other hand, Bulls have been propelling AVAX/USD higher lately, possibly implying more gains over the next 24 hours.