Zuckbucks.cash website is mocking Zuckerberg and Libra with class 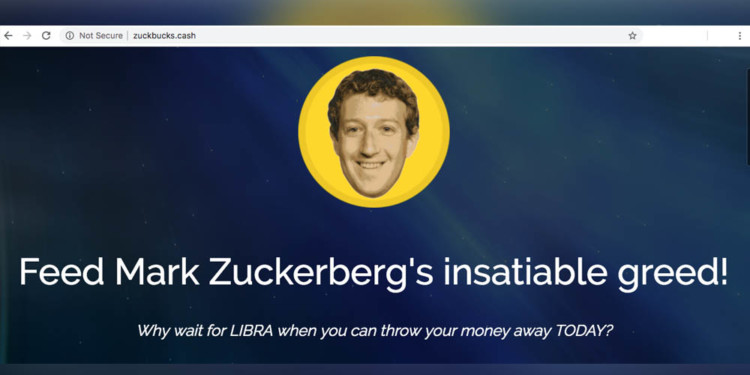 ZBux is a new cryptocurrency token that has been founded by anonymous cryptocurrency enthusiast who went to great lengths to mock Mark Zuckerberg deeming his “greed” unsatiable.

The website ZuckBuck.cash has been found to not only mock the recently introduced Facebook Libra stablecoin but also offer a made-up currency ZBUX.

The website welcomes users with the statement, “Why to buy Libra when you can throw your money away”.

This website’s landing page is designed to be a landing page for ZBUX supposedly an ERC20 token which “can be used to do absolutely nothing” as the homepage suggests.

The page has been divided into sections where the “Why ZBUX” section states that Facebook is milking its users for their data already and now it is going to build a centralized currency in disguise of a cryptocurrency.

The section goes on to explain – read, mock – that since the “greed” in the corporate sector cannot be satiated, but it would also not have any major impact on the crypto sphere.

While explaining the nature of ZBUX token, the section furthers that you cannot buy Coffee or pay your bills, but if you are willing to throw your money at Facebook you might as well throw it away in any useless token, such as the non-existent parody coin ZBUX.

The website has been designed to look like a real cryptocurrency website where the total ZBUX are sated to be one and half million (1,500,000) while almost a million (978,689) are in circulation. Lastly, the website not only provides an Ethereum (ETH) contract to the users along with an ETH address with activity scanner on EtherScan.

The best part is that the website is actually receiving ETH in exchange for ZBUX, albeit in small quantities, but the cryptocurrency community is appreciating this hilarious project.