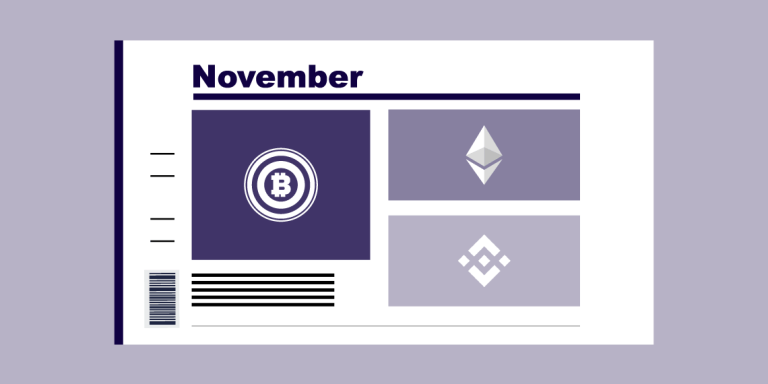 Our crypto market outlook for November is that we expect to see continued growth, as more and more institutional investors enter the market and drive up demand. Cryptocurrencies, Bitcoin (BTC) included, showed little fluctuation in October, which is unusual.

After a largely lackluster market month, cryptocurrency ended October slightly higher, setting up what may be a busy November. A market short squeeze may have played a role in the bullish trading activity that occurred in the latter part of the month in Bitcoin and Ethereum (ETH).

One potential driving force behind November’s market activity is the increasing interest from institutional investors. A decrease in U.S. Treasury bond yields in the final week of October also contributed to the recent surge, which helped cryptocurrencies like Bitcoin and Ethereum rise in anticipation of a possible Federal Reserve rate hike in early November.

Mastercard, a leading global payments firm, has announced that it has selected seven cryptocurrency businesses to join its Start Path Program. The business has been assisting businesses all across the market in accelerating the adoption of cryptocurrency for the past few years. According to the company’s release, this program is designed to assist startups all around the world in promoting the acceptance of the cryptocurrency market.

October saw Bitcoin prices remain at a steady $19,000-$20,000, with very little fluctuation throughout the month. This is unusual for the cryptocurrency market, which often sees significant price swings daily.

For the first time since 2020, BTC’s 20-day rolling volatility fell below that of the Nasdaq Composite and the S&P 500. Anthony Rousseau, senior director of product strategy for crypto at TradeStation, believes that this might be a positive development for cryptocurrency investors.

“History demonstrates that Bitcoin’s low volatility may be a sign that it is nearing a bottom sooner than the equities markets,” Rousseau said, adding that the volatility of Bitcoin is currently starting to decrease as its weekly range gets smaller.

October also saw major moves by institutional investors, indicating increasing interest and demand for cryptocurrencies. These include Elon Musk’s acquisition of Twitter which saw a surge in Dogecoin as well as other cryptocurrencies.

Heading into November, it looks like investor concerns about inflation and rising interest rates may be starting to ease. This could lead to more positive market activity in the crypto space, especially with increasing institutional interest.

In the last full week of October, Bitcoin, Ethereum, and other cryptocurrencies made a breakout to the upside, with Bitcoin rising to above $20,900 and Ethereum exploding to above $1,580. This bullish move was likely due to a market short squeeze, in which traders who had bet on the market going down were forced to buy back their positions.

Both Bitcoin and Ethereum were expected to end the month with gains of 6% and 20%, respectively. Sadly, both cryptocurrencies have lost more than 57% of their value thus far this year.

However, during the past week, cryptocurrency ventures have fallen victim to exit fraud and rug pulls, costing investors millions of dollars. For instance, after a hot wallet assault in which hackers stole $28 million in digital assets, Deribit, one of the largest cryptocurrency options exchanges, ceased allowing withdrawals. An Oracle exploit cost the Solana Defi application Solend an additional $1.26 million in losses.

The US dollar continues to soar, Bitcoin and Ethereum are finding support

As November approaches, investor worries about inflation and increasing interest rates seem to be fading. The probability of a fourth consecutive 75 basis point (bps) federal fund rate increase in November is currently seen by the bond market at 89%.

However, the dollar continues to surge. The DXY index, which tracks the US dollar against a basket of six major currencies, hit a two-year high in October and has continued to climb in November.

Cryptocurrencies are often seen as a hedge against inflation and weakening fiat currencies, so it’s not surprising that they’re finding support despite the strong dollar. Although crypto prices appear to be picking up some speed, the effects may be limited by the mighty U.S. dollar.

Those concerned about a potential worldwide economic decline have been investing in the dollar throughout 2022, pushing its value higher against foreign currencies.

But there are also increasing signs of institutional interest in the cryptocurrency market, which could help mitigate any negative effects of the strong dollar. A strong U.S. dollar generally means bad news for cryptocurrency prices, as the two are inversely correlated.

What comes next for the big “B” is expected to be continued strength for the dollar.

The peak in the value of the dollar still “feels several quarters away,” according to Goldman Sachs analyst Kamakshya Trivedi, who also predicted that the Fed would not start lowering interest rates until 2024.

But even with a strong dollar, increasing institutional interest in the cryptocurrency market could offset any negative effects and drive prices higher. Fidelity Digital Assets recently reported that 40% of institutional investors now own some form of digital assets, up from 22% in 2019.

Institutions are starting to show more interest in crypto amid global financial uncertainty. The cryptocurrency market remained rather muted, but institutional players made several noteworthy movements.

In late October, the CEO of Fidelity Digital Asset Management announced that the $9.9 trillion asset manager would be adding another 100 personnel to the division of its digital assets, increasing its total workforce to about 500.

Marcus Sotiriou, an analyst at GlobalBlock, claims that the hiring spree is simply the most recent in a string of actions that indicate Fidelity is growing more optimistic about cryptocurrencies. Fidelity’s action defies the gloomy trend of massive layoffs at several crypto businesses.

According to Sotiriou, Fidelity and other sizable institutions’ opportunistic investments are comforting.

This implies that larger enterprises with stronger balance sheets who can weather the storm will profit from others’ failure, the author claims.

The US  Securities and Exchange Commission (SEC) has taken an increasingly strict stance on cryptocurrencies in recent months. Although the cryptocurrency market has a reputation for being decentralized, SEC Chair Gary Gensler claims it is nevertheless susceptible to the damaging effects of middlemen like market makers and exchanges.

“We’ve even seen centralization in the crypto market, which was founded on the idea of decentralization. This field has significant concentration among intermediaries in the middle of the market,” Gensler said on Monday before the annual meeting of the Securities Industry and Financial Markets Association.

The bulk of cryptocurrencies, according to Gensler, are securities. He also claimed in June that cryptocurrency exchanges that don’t work with the SEC are “working outside the law” and could face enforcement action.

Kim Kardashian, a popular TV personality, was made an example of by the SEC. Early in October, the social media celebrity agreed to pay a $1.26 million settlement to resolve allegations that she failed to declare $250,000 in income for endorsing EthereumMax on Instagram.

According to Gensler in a news release on October 3, Kardashian’s payment should “act as a reminder to celebrities and others.

Crypto regulation will undoubtedly become more strict and widespread, but it’s also argued that it could bring positive benefits to the industry. It may weed out fraudulent actors, increase consumer protection measures, and ultimately lead to greater adoption and trust in cryptocurrencies. The election itself may be an under-the-radar crypto market catalyst in November. The Republican Party is generally considered pro-crypto and anti-regulation so a big GOP election win could prompt a crypto market rally.

A new Senate bill with support from the Republicans might offer at least temporary regulatory protection for cryptocurrency exchanges.

The Digital Trading Clarity Act of 2022 would, in part, establish a transitional compliance period during which enforcement actions against exchanges for listing digital asset securities or for failing to register as a securities exchange or broker-dealer would not be permitted.

But voters might not agree with the mood to be cautious with cryptocurrencies.

According to a recent survey by the Crypto Council for Innovation, 52% of the 1,200 probable voters surveyed want more regulation of cryptocurrencies, while only 7% want less.

Overall, there are both factors pushing cryptocurrency prices higher and weighing them down. But with increasing institutional interest and regulatory pressure, the long-term future looks promising for cryptocurrencies.

At the close of the week, Bitcoin is trading at $20,633 and Ethereum at $1,581. Altcoins like Chainlink and Dogecoin have also seen upward trends in price this week. The market catalysts will continue to play out, but investors should stay vigilant and informed as the crypto industry continues to evolve.