Non-fungible tokens (NFTs) were all the rage in 2021. They are cryptographic assets on a blockchain that is not always worth the same thing. An NFT possesses a unique ID number and other details that make them stand out from the others. The same value of coins like this can’t be exchanged or traded.

The use of non-fungible tokens is different from that of cryptocurrencies. Unlike NFTs, digital currencies are interchangeable, which is why they can be used for commercial transactions.

Chainalysis, a blockchain analysis company, has found out how many people wash trade NFTs to make them more valuable.

The purpose of wash trading is to make it appear that a financial instrument is more popular than it is. The traders do this by exchanging money from one account to another by buying and selling a particular crypto art to manipulate or mislead people.

NFT wash trading can be tracked by analyzing NFT sales to self-financed addresses (i.e., those that were either funded by the selling address or the address that initially funded the selling address). NFT sellers are suspected of making hundreds of wash deals. 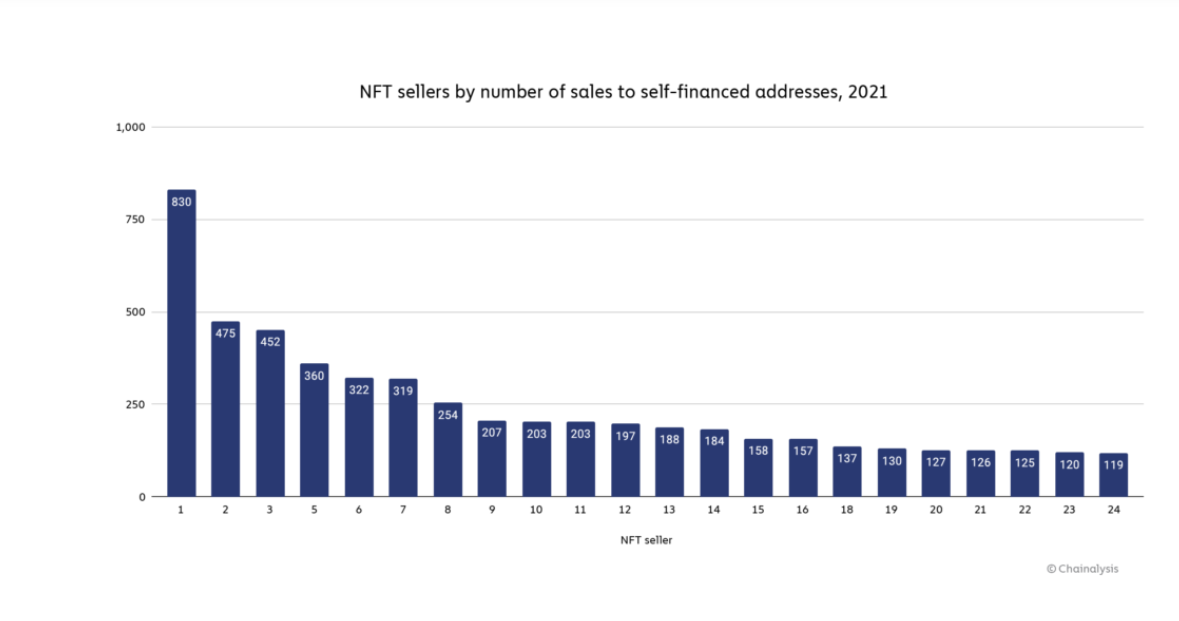 Some wash traders have found that their costs outweigh their profits when they sell it to a victim whose token is overvalued. Look at Seller 1, who has made 830 deals with self-financed properties. An NFT was sold for 0.4 ETH by address 0x828, using address 0x084.

In this case, seller 1 is central. So far, wash trading hasn’t helped seller 1. NFT sales to unfunded addresses don’t pay for the gas used in wash trading transactions, so the money doesn’t cover the costs. More than $416,000 (£306,000) was lost by 152 of the 262 dealers analyzed by Chainalysis, yet the cumulative gains gained by successful traders showed that the strategy was very lucrative overall.

Sales to “naive customers” accounted for more than $8.8 million (£6.5 million) produced by the 110 dealers who did not lose money. “Though they believe the crypto arts they are obtaining has been increasing in worth, sold from one unique collector to another,” in fact, the fraudster has only transferred them between accounts controlled by them.

According to Chainalysis, there is a good chance that the company didn’t know about wash trading. Even though it is illegal in the United States to use this method with traditional financial instruments, no enforcement action has been taken against these crypto arts, which are mostly unregulated.

Meanwhile, the report from Chainalysis also showed that more than $44 billion (£32 billion) worth of bitcoin was sent to NFT-related smart contracts last year, an increase of 106 percent from the same time in 2020.

Because crypto arts aren’t explicitly characterized as a commodity or financial security in most nations, it’s not lawful to wash trade them in many places. However, this is still a terrible situation.