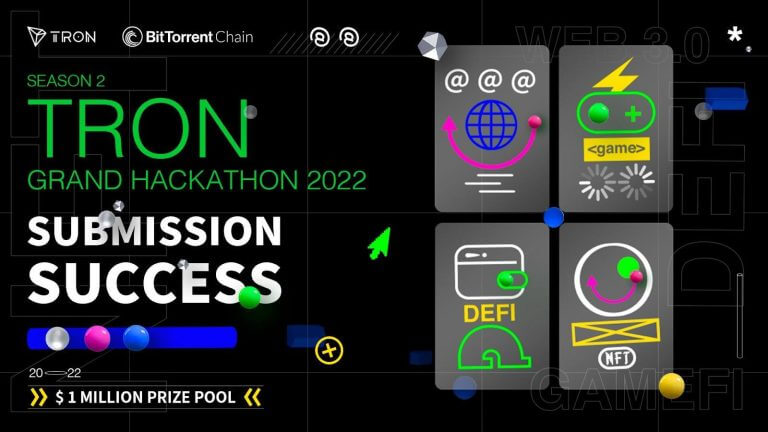 –Season 2 of The TRON Grand Hackathon 2022 has seen a wave of submissions receiving over 1800 participants since it kicked off on May 16, a staggering increase from Season 1 of the Grand Hackathon earlier this year. Similar to the first season, TRON DAO and BitTorrent Chain (BTTC) aim to inspire developers to achieve their project goals.

The second season of the TRON Grand Hackathon consisted of over 30 major partners, nearly 40 different judges, and a community voting system. TRON DAO participants could take part in helping move the needle for their favorite projects building on TRON and BTTC across all four tracks: DeFi, Web3, GameFi, and NFT. Within these four tracks, there are 74 submissions for Web3, 48 for DeFi, 50 for NFT, and 30 for GameFi. Project submissions came across 64 different countries, and total participants from 104 countries. The diversity in participant submissions further highlights the growth of TRON’s global audience.

What Are Judges Looking For?

The judges have already started the vetting process to find the next big project. Across the four tracks, there are different qualities that judges are looking for. In the Web3 track, TRON DAO is looking for projects that are helping provide sustainable solutions that Web2 products could not create efficiently. In the NFT track, we are looking to find projects that take advantage of blockchain technology in order to help grow the creator economy. In the DeFi track, a big goal is to find projects focused on democratizing finance. Lastly, GameFi projects are aimed at creating enjoyable video games with native utility given to gamers.

The judging began on August 1 at 9 a.m. EDT and will end on August 11 at 5 p.m. EDT. As mentioned earlier, TRON DAO users can take part in the voting process to help award the community favorite prize. Check out TRON DAO Forum to learn more about how to vote. The forum Hackathon poll is also live for everyone to view here.

With the growing demand and success of our Hackathons, we intend on creating many more in the near future. An increase in applicants, prizes, partners, and judges are all a major goal for TRON DAO. TRON believes in creating incentives for projects to attain, as that inspires future pioneers to utilize our trusted network. TRON also believes in a virtuous cycle of supporting developers and projects to innovate on our blockchain as it helps onboard more users to the ever expanding TRON ecosystem.

TRON is dedicated to accelerating the decentralization of the internet via blockchain technology and decentralized applications (dApps). Founded in September 2017 by H.E. Justin Sun, the TRON network has continued to deliver impressive achievements since MainNet launch in May 2018. July 2018 also marked the ecosystem integration of BitTorrent, a pioneer in decentralized Web3 services boasting over 100 million monthly active users. The TRON network has gained incredible traction in recent years. As of July 2022, it has over 104 million total user accounts on the blockchain, more than 3.6 billion total transactions, and over $11 billion in total value locked (TVL), as reported on TRONSCAN. In addition, TRON hosts the largest circulating supply of USD Tether (USDT) stablecoin across the globe, overtaking USDT on Ethereum since April 2021. The TRON network completed full decentralization in December 2021 and is now a community-governed DAO. Most recently, the over-collateralized decentralized stablecoin USDD was launched on the TRON blockchain, backed by the first-ever crypto reserve for the blockchain industry – TRON DAO Reserve, marking TRON’s official entry into decentralized stablecoins.