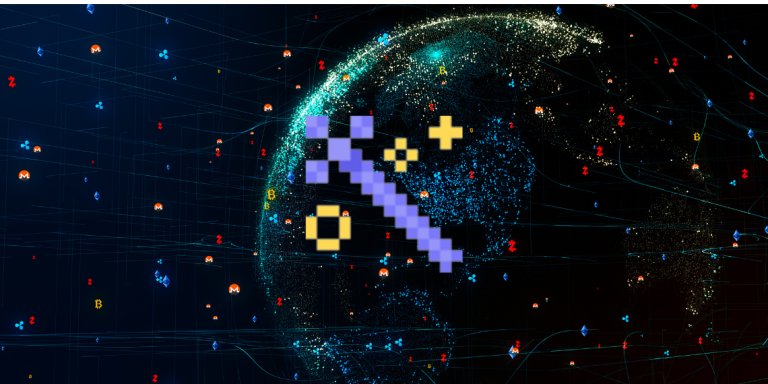 There are various investment options available in the crypto world; one of them is Abracadabra. The formula for earning profits on investments in Abracadabra is simple. The blockchain system makes investors profit from their collateral. The new protocol can be compared to a property you took a loan and got rent for it.

Things are shifting in the crypto space as KuCoin Exchange announce the removal of the SPELL token from its list. Previously, SPELL was on a dump and PUMP alert.

The Abracadabra protocol offers a DeFi solution to modern problems, and its native token is SPELL. SPELL token is seen as a solution to its competitors’ deficiencies. The Spell uses three different tokens to lend money in Abracadabra. The inclusions are yvWETH, yvUSDC, and xSUSHI. The user can use them for lending Internet money. Abracadabra offers a solution to the money that is in no active use.

How much is SPELL worth?

There are many ways to interpret these wavy price movements, one is higher highs and higher lows indicate that an uptrend is occurring with the overall increase in the value of the cryptocurrency, while lower highs and lower lows can be seen in downtrends and show a decrease in value. Traders analyze this information to make future decisions and predict potential changes in trends.

What is Spell token?

The two significant tokens in the Abracadabra protocol are MIM and SPELL. These two are involved in the smooth running of the main functions of the mentioned ecosystem. MIM stands for ‘Magic Internet Money’ and is the lead partner in staking along with SPELL.

The primary function of these two currencies is staking. They are used on the Ethereum platform and work for staking. Once staked on the forum, they have various benefits. The main benefits that the SPELL token brings are a role in governance and bringing passive income.

Once you have invested in the Spell token, you have voting rights resulting in a role in governance. The more SPELL tokens you have, the more you will have a say in decisions. The passive income comes to the users as a percentage of trading fees.

75% of the trading fee goes to investors; the rest is for other purposes. Thus, SPELL cryptocurrency works in the decentralized blockchain system offering different benefits.

Currently ranking 206 in the list, Spell token has been one of the top gainers. The token forecast is based on previous performance and current metrics. The current price for the SPELL token is $0.02501, while it has seen a rise of 2.95% in the last 24 hours.


How does Spell token work?

Since its launch in August 2021, as per the available data on CoinMarketCap, the Spell token has seen a tremendous rise. You might want to know how it works and the secret to its growth. Spell token technical analysis shows that this token’s protocol is different from others.

The protocol is an ‘isolated lending market,’ and it helps earn the users’ magical money. Abracadabra completes this process in five steps which are as follows.

The performance for the Spell token has been satisfactory if we look at its tremendous rise. The below-given chart from Wallet Investor shows that it has performed exceptionally since its launch in August 2021.

Beginning from $0.000621 on 17 August 2021, the Spell token has risen to the heights of $0.033327 on 1 November 2021. The unbelievable rise in three months, leaving behind many coins, shows this coin’s potential for future growth. Along with the technical analysis of historical data, its predictions show a good investment.

Wallet Investor ranks Spell token in the category A+ because of the investor rally that it has attracted. The market will improve further if its bullish trend continues.

No major downfalls lead to a decrease in its price, which justifies the token price prediction.

Developments in the Abracadabra protocol

The Abracadabra protocol recently partnered with StrikeX, a platform that aims to develop the next generation of blockchain technologies and products.This is aimed at increasing the adoption of the SPELL token.

Abracadabra Protocol has involved itself in the NFT space. As we all know, the NFT space experienced incredible growth and surged to a $40B industry in 2021, locking a large amount of capital in the new asset class. Abracadabra introduced the AbraNFT, a peer-to-peer lending market to allow NFT collectors to open time-based borrowing positions in their precious NFTs. The AbraNFT will introduce Abracadabra Money to the NFT ecosystem, helping farmers and retail users get the best from their NFTs.

Where to buy SPELL?

The top cryptocurrency exchanges for trading SPELL token stock are Binance, OKX, Bybit, FTX, and MEXC. You’ll find more for your particular purpose. You may also find additional markets for your own purpose in the table below:

The Bollinger bands are forming a narrow pattern due to the momentum with the highest point at $0.0006442 and the lower limit trading at $ $0.0004812.The candle bars are trading near the lower band, as the MACD line is almost trading above the signal line. 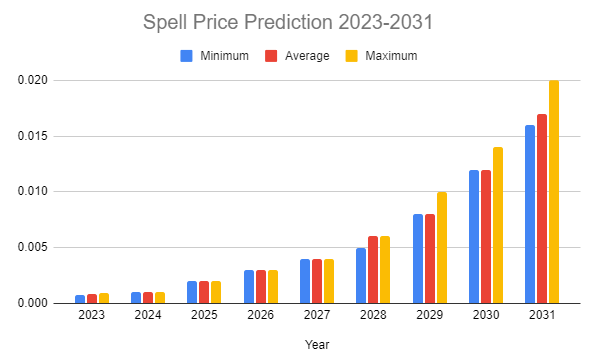 Our Spell price prediction for 2023 demonstrates that a maximum price of $0.0009584 is anticipated for the price to conclude the year. According to our forecasts, the price of Spell coins will remain constant during the year, fluctuating between a minimum of $0.00080026 and an average of $0.0008229 per coin.

Our Spell price prediction for  2024 shows that Spell will experience a bull run, and the price could undoubtedly rise and potentially attain a maximum price value of $0.001. Although the price is seen to rise from the previous year, the coin will have to experience a minimum price of $0.001 and maintain its average trading price at $0.001.

Our Spell price prediction for 2025 is a maximum of $0.002. The minimum price the coin will have by the end of 2026 will be $0.002, while its average trading price is expected to be $0.002. The growth will be enabled by the continuous growth of the Spell tokens, Safemoon network, and ecosystem.

Our Spell price prediction for 2026 states that the Spell price range will hit a maximum base price of $0.003. We expect the digital coin to continue its bullish run from the previous year while keeping a minimum and average price of $0.003 and $0.003, respectively.

Our Spell price prediction for 2029 claims that the Spell price range will reach an introductory price of $0.01 at its highest point. The digital coin’s bullish trend from the prior year is anticipated to continue, and we anticipate it to maintain its minimum and average prices of $0.008 and $0.008, respectively.

Our Spell price prediction for 2030 forecasts also projects an average market price of $0.012, with the minimum price set at $0.012 and the maximum Spell price at $0.014. Developers could increase the adoption levels of the network, thus leading to these market prices in the coming years.

Our Spell price prediction for 2031 demonstrates that a maximum price of $0.02 is anticipated for the price to conclude the year. According to our Spell forecasts, the price of Spell coins will remain constant during the year, fluctuating between a minimum of $0.016 and an average of $0.017per coin.

The value of Spell Token is projected to climb further as scarcity drives up prices. By the end of the year, the average price of Spell Token (SPELL) might reach $0.00056639. According to Price Prediction Net,  five-year forecast, they see the coin will easily hit the $0.003 barrier.

Spell Token has the ability to soar to new heights. It is expected that the value of SPELL will rise. According to specialized specialists and business professionals, Spell Token might reach a high of $0.020 before 2030. In addition, its speculative nature provides exposure to a worldwide technology and an ever-expanding ecosystem.

Digital Coin Spell coin price predicts that the value of Spell Token will climb by 219.05% by the end of 2024, hitting $0.00186. All technical indicators point to a bearish current attitude, with the Dread & Greed Index reading 23.63, indicating significant fear. According to our Spell Token forecast, selling Spell Token right now is dangerous.

By the end of December, the value of Spell Token has risen by 18.89% to roughly $0.000617. All indicators are currently in the Bearish zone, and the fear & greed index indicates 23.63 strong fears. According to Digital Coin predictions, now is not the time to sell Spell Token.

According to the positive long-term Compound estimate from the algorithm-based forecast by a YouTuber Crypto Investing, he predicts the coin’s value will experience a bull run. The website’s long-term compound estimate is positive since it indicates that the price of Spell might rise as high as $0.032 in 2025 and as high as $0.14 by the end of 2029.

The SPELL token is now popular due to its continuous price actions. It has appeared in many trending sections of most crypto sites. The token can be profitable in the future, but it is essential to know that the cryptocurrency can also drop due to its high volatility.

The SPELL token could be a good investment if you want to stretch interest-bearing crypto assets to their mathematical limits. Again, the token offers investors liquidity rewards, Defi Staking, and other interest-related opportunities. Their interest in the NFT space will help sustain the project in the long run. If you are interested in investing in this cryptocurrency, we advise that you do your research before investing,

SPELL has excellent potential, but according to these SPELL price predictions, the $1 mark is not feasible. But it is essential to know that the market might take a drastic U-turn, and we may see SPELL surpass our predictions. According to our price prediction, SPELL is a promising cryptocurrency, and it is profitable as a long-term investment.

It is essential to know that SPELL’s long-term profitability can be due to its numerous and upcoming future projects, such as its liquidity rewards (for investors), NFT projects, and many more. Again, we advise that cryptocurrencies are highly volatile. Before you invest in them, ensure you do your own research. Invest the funds that you can afford to lose.

This growth depends on various variables, including announcements, new technology solutions from the Spell Token initiatives, general crypto market conditions, and legal status. Before investing in a cryptocurrency, we remind you to research (DYOR).

Is Spell token a good investment?

Spell Token's value is expected to continue to expand, as shortage tends to encourage price rise. Please note that there is some risk to any investment. Just invest in what you can accomplish before coming to any conclusions and conduct the maximum research possible.

What is the future of SPELL?

Favorable market conditions will push Spell to a high price of $0.047.

Can a spell token hit 1 dollar?

Although Spell Token (SPELL) has been in a continuous uptrend and has an impressive market capitalization of almost 2 billion dollars, it is unlikely that it will ever hit $1 due to its enormous total supply.

9 mins read
Bitcoin sells at a 60% premium in Nigeria as the government shifts to a cashless policy
30 January, 2023

9 mins read
Binance burns 16m worth of BNB tokens; transitions from the ERC20 version of BNB to BEP2
29 January, 2023