Polkadot price analysis: DOT/USD set to break above the intraday highs of $37.5 According to the daily and hourly Polkadot pricing analysis, the price is falling. This is because the bears have been able to depart via bullish momentum, and red candlesticks have reappeared on the price charts. More sellers are intruding into the price flow, and DOT is facing resistance from a bearish position. Minor support has been created at the $33.58 stand.

The downtrend for this week continues as the value of DOT remains below SMA100 and SMA200, which are at $35.60 and $35.58, respectively. From the monthly DOT/USD chart, we can see that the RSI has reached a score of 35%. That indicates that the price is likely to go downwards from here. In addition, the Bollinger bands remain separate as opposed to being close together, which means increasing volatility.

The price is continuing to drop, after having risen briefly during the day. The one-day price assessment of Polkadot continues to back the decline, with the price resting on the $33.43 mark. Last week helped Bitcoin’s value improve considerably, but today’s trends have undergone a small change.

Looking at the 200 MA trend line, the price has come to a point resting on it. The bears are taking complete control of this trading ground, so there’s nothing left for the bulls but to retreat. On the DOT/USD hourly chart, we can see that the price has begun to fall once again after having risen briefly during the day. Now, it is standing at the $36.18 mark, where it has exceeded the 23.6 retracement point in favor of the bears. Having approached that position, DOT sees bearish momentum take control over its price again.

The four-hour Polkadot price forecast is for a bearish trend, as the price has been steadily decreasing for the past several hours. The downtrend has taken people by surprise, as the value was traveling safely earlier in the day. It has retreated to $36.46, below the previous and current moving averages at $36.60 and $36.58, respectively. From the chart, we can see that the RSI has taken a dip down to 35%. That means there is already an indication of what’s to come for the next 24 hours. 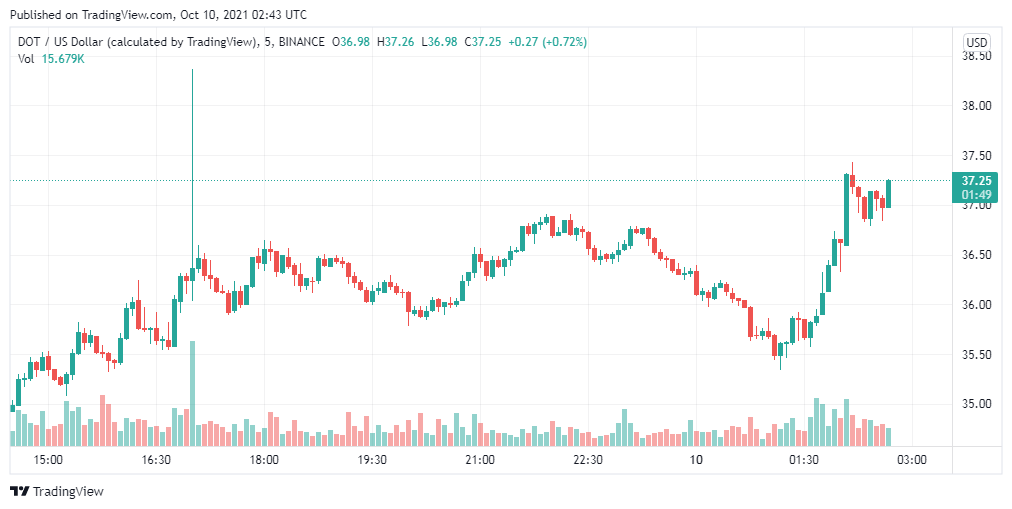 As seen below, the $35.35 mark of the average Bollinger band tells us that the volatility is increasing, and the price is expected to jump soon.

The four-hour DOT/USD chart shows us that the price is struggling to exit the area between $35.58 and $36.18, as it remains at a standstill in this zone and continues to waver around these two points. The RSI has reached 35%, which means there’s an indication of what’s to come for the next 24 hours. However, it’s still too early to predict anything for this day.

The Polkadot (DOT) value has fallen again to $34.56 after having recovered briefly at the beginning of today’s trading session. The downtrend has taken people by surprise, as the value was traveling safely earlier in the day. However, it has now succumbed to bearish pressure and fallen back to its present position. That means that DOT is currently hovering around its previous low of $34.55.

Today’s price decrease was anticipated by the one-day and fours Polkadot price analysis. After a reversal, the bearish candlesticks reappeared on the price chart as trends reversed. The price has dropped to $36.43, which has been for quite some time, after the bearish resurgence. However, if $35.72 is crossed out of the Bollinger band, there will be a change in trend.