The Dogecoin price has been bearish since the beginning of October when it fell from a high of $0.25 to a low of $0.22 for several days. As a result, we anticipate that the DOGE/USD pair will rise even higher as bears look to establish a new low.

The Dogecoin price fell rapidly earlier today, breaking below the $0.23 support level in early trading. As a result of this significant break, we look for more profit-taking by shorts eager to establish new positions near the lowest levels in over two weeks. Such an event would likely push the DOGE/USD pair even lower, opening the possibility of a sustained decline towards $0.2 over the next week. That said, it is impossible to know for sure what will happen in this market, so Dogecoin may continue lower or form a wide trading range over the coming days instead.

After reaching a price of $0.2541, the Dogecoin price fell rapidly earlier today to reach a low of $0.22375, representing an intraday move of over 5%. This rapid fall is likely to be followed by a retracement as bears look to set up another attempt at pushing the DOGE/USD pair to new lows. As a result, we anticipate that the decline will be short-lived and that the price of Dogecoin will rise again to retest resistance at $0.23.

Alternatively, this rapid fall may have shaken out most of the weak hands in the market, allowing bulls to regain control and push the DOGE/USD pair higher in the near term. If this is the case, we may see Dogecoin rise even further after it retraces, establishing a new local high before continuing to fall again. The next few days should provide some insight into which scenario will play out, and we intend on closing our position if either one becomes clear.

Cancellation of this Dogecoin price forecast will signal that the uptrend is about to resume and that buying opportunity should be taken before DOGE/USD shoots up in value once again.

So far, the DOGE/USD pair appears set to test resistance at $0.23, but it may continue to retrace up to $0.25 before moving higher once again. The next few days should provide insight into which scenario will play out, so we intend to close our position early if either one becomes clear.

After a period of consolidation between $0.24 and $0.25, DOGE/USD saw a swift decline earlier today, dropping from an opening price of around $0.2461 to a low of $0.22. The selling pressure continued to push the price lower, but the decline has been mild from this point onwards.

As a result of this sudden change in momentum, we anticipate DOGE/USD to retrace further as bears look to establish a new low. While this price drop may be extended should there not be significant support at around $0.22, our technical analysis suggests that this is unlikely.

After a brief downturn earlier today, DOGE/USD is once again trading around $0.24. We’ve witnessed a gradual return of stability to the DOGE/USD market after an extended period of volatility over the past few days. 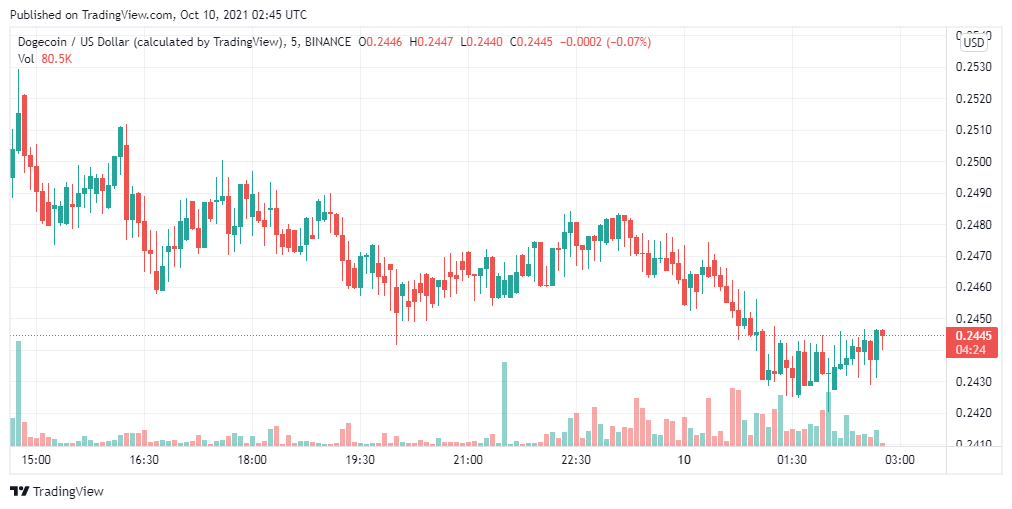 The 4-hour chart below shows DOGE/USD’s recent activity, with a key resistance zone between $0.24 and $0.25 to watch for future price movement. The 100 SMA has crossed above the 200 SMA, suggesting that the easiest path to the upside is through it. On the other hand, both moving averages are now starting to flatten out, meaning that the market will continue to trade sideways.

The 100 SMA is still above the longer-term 200 SMA, upholding its role as a dynamic resistance level. The gap between the moving averages is widening, but it appears to be moving sideways.

The Dogecoin price has enjoyed a relatively stable trading week, with its intraday gains not being met with significant losses in the following session. However, DOGE/USD’s stability seems to be slowing down as it prepares to move higher.

The price of Dogecoin has consolidated within the ascending channel on the 24-hour chart, with its volume slightly lower than usual. The intraday high is around $0.235 while support is at $0.22 and $0.2150.

The Dogecoin price is presently bearish, with a minor decline being noted following a several-day consolidation around $0.22. We expect the DOGE/USD pair to rise even further as bears look to create a new low, with resistance at $0.24 and $0.25 ahead.