The Dogecoin price is presently bearish, as a minor decline was observed following a several-day consolidation around $0.22. As a result, we anticipate DOGE/USD to rise even further as bears look to establish a new low.

After a period of consolidation between $0.24 and $0.25, DOGE/USD saw a swift decline earlier today, dropping from an opening price of around $0.2461 to a low of $0.22. The selling pressure continued to push the price lower, but the decline has been mild from this point onwards.

As a result of this sudden change in momentum, we anticipate DOGE/USD to retrace further as bears look to establish a new low. While this price drop may be extended should there not be significant support at around $0.22, our technical analysis suggests that this is unlikely.

Despite seeing a slight decline earlier today, DOGE/USD has now returned to trading around $0.24. Over the past couple of days, we have seen an eventual return of stability to the DOGE/USD market after a prolonged period of fluctuation.

A key level to monitor going forward its support is at $0.2345, as a break below here could result in a long decline towards new multi-month lows over the coming days. This is around the 38.2% Fibonacci retracement level, which holds the market above this crucial support.

Although we anticipate an even sharper decline should support fail to hold at $0.2345, we expect a brief period of consolidation to take place before an increase in selling momentum is seen.

The Dogecoin price decreased on the 4-hour time frame, below the consolidation region that formed over the previous days. 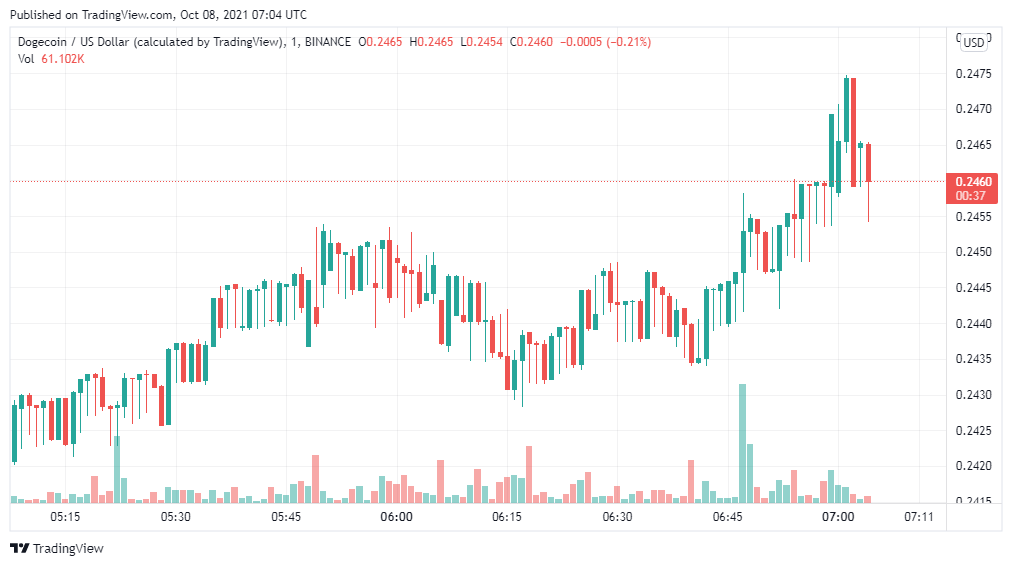 The 4-hour chart below demonstrates the latest moves in DOGE/USD, with a key resistance zone between $0.24 and $0.25 to monitor going forward for future price movement. The 100 SMA has crossed above the longer-term 200 SMA, indicating that the path of least resistance is to the upside. However, both moving averages remain flat, suggesting a period of sideways trading could be seen before another minor decline occurs.

The RSI has dropped below 50 and is signaling further losses for DOGE/USD. Both stochastic and RSI are trading in the overbought regions suggesting that selling pressure could ease, allowing for a consolidation period.

The Dogecoin price is presently bearish, as a minor decline was observed following a several-day consolidation around $0.22. We anticipate DOGE/USD to rise even further as bears look to establish a new low, while resistance is seen between $0.24 and $0.25 going forward.