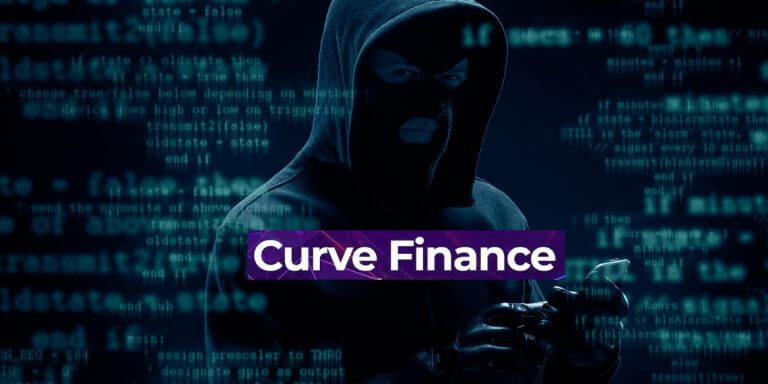 The crypto winter has not spared anybody. Investors, crypto exchanges, and decentralized finance ecosystems have all become casualties. Curve Finance, an automated market maker that allows users to trade currencies on their Web sites, took to Twitter yesterday to advise customers about an exploit on its site.

According to the protocol’s developers, the problem, which appeared to be a hostile actor’s attack, was affecting the service’s nameserver and front-end.

Curve Finance hit in the most recent DeFi hack

According to a screenshot of the protocol’s wallet shared on Twitter, hackers stole approximately $570,000 from the decentralized finance (DeFi) protocol Curve Finance. According to Curve Finance, which utilized Twitter to disclose the fact that its exchange – a distinct service – appeared not to be affected by the assault since it used a separate domain name system (DNS) supplier.

The protocol operators announced via Telegram that they had identified and fixed the source of the problem shortly after. Curve Finance advised investors who had agreed to any contracts in the previous few hours to withdraw them immediately. Users were also advised to use curve.exchange instead of the deprecated curve.fi until the spread of the curve.fi normalizes.

Curve Finance speculates that Iwantmyname’s DNS server was hacked, stating that it has subsequently altered its nameserver. A nameserver acts as a directory, translating domain names into IP addresses.

Curve Finance’s CRV token rewards emissions, which serve as a source of income for several other protocols, are an important component of the DeFi ecology due to their role in financing.

We are becoming aware of a potential front-end issue that is approving a bad contract […] For now, please do not perform any approvals or swaps. We’re trying to locate the issue, but for now, for your safety, do not use curve.fi or curve.exchange.

Analysts were bullish on Curve Finance in July, despite the fact that the market has been declining, which impacts the broader DeFi space. According to Delphi Digital’s experts, the reasons for their optimism were the platform’s yield possibilities, CRV demand, and protocol income from stablecoin liquidity.

The launch of a new “algorithm for exchanging volatile assets” in June, followed by a promise to enable low-slippage swaps between “volatile” assets, has caused another stir on the crypto scene.

These pools use a combination of internal oracles and a bonding curve model. This was previously used by popular automated market makers such as Uniswap.

Although it may seem like a fad, DeFi is far from one. It’s the next big thing in the world of finance. If web 3.0 is to be regarded as the new Internet, DeFi is its financial ecosystem. Of course, there are dangers associated with decentralized finance. The problem of DeFi token and protocol vulnerability plagues the world of decentralized finance.

The bad news is that $2 billion has been lost to hacks, scams, and exploits thus far in 2022, including another $570 as of today. The good news, if you can call it that: Falling crypto prices might have deterred hackers and customers alike, with the rate of losses slowing in the second quarter.

DeFi hacks, on the other hand, are all too common. Hackers and scammers robbed $745 million from April through June, following three months of record-breaking DeFi vulnerabilities.

Hackers hacked the Ronin bridge, exploited a flaw in the Wormhole network’s code, and took over Beanstalk Farms with a governance assault just in the first four months of 2022.

The rise of crypto rugs, and similar scams, has waned in the crypto bear market. The bull market’s rising prices and relentless hype lured in a new class of investors that were easy targets for crypto fraudsters.

Rug pulls, on the other hand, have remained a popular tactic of fraud because they are such an easy method to execute. Despite this, they decreased by 18% from the first quarter to the second.

The ability to hype a project and some stealth in ghosting investors are all that is needed for a rug pull. However, it doesn’t help that celebrity endorsements give certain projects the appearance of legitimacy, despite their actuality.

The number of successful social engineering attacks is on the rise once more. Social engineering assaults that target users or staff increased by 170% from the first quarter to the second quarter this year. Hacks targeting DeFi protocols were prevalent in 2022. But hackers have returned to phishing users.

There have been a lot of hacks involving cryptocurrencies in 2022. Many of these hacks have been linked to the Lazarus Group based in North Korea. This has resulted in investors losing a lot of money in the current market conditions.

The crypto winter, recessions, hacks, and bad investments are all evidence of the climate in the crypto sectors. However, this hack was better handled because Curve Finance detected it early and supplied solutions promptly.