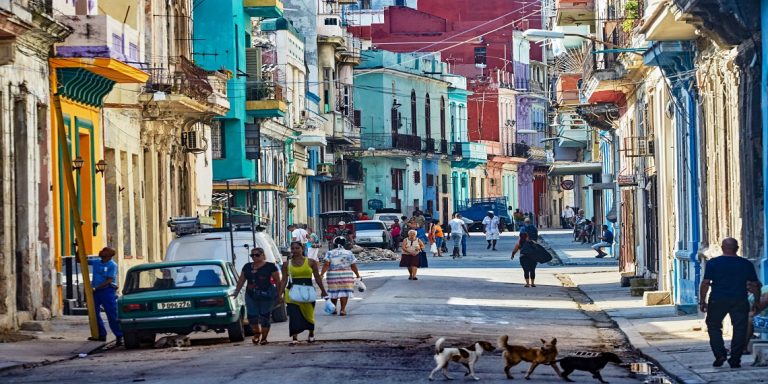 The crypto market reaches every corner of the world, including Cuba. Recently, an increase in crypto negotiations was shown from the island, where around 100,000 citizens are counted using the tokens to avoid economic blockades. The curious thing is that the island lacks a good internet connection, but this has not been an impediment for citizens to use them.

Cryptos like Bitcoin have represented a financial option in various countries worldwide. Its adoption wave started with China and later expanded to the rest of the countries in Asia.

Cubans use Bitcoin for purchases

Cuba’s island, which has suffered from economic blockades and internet connection rebuke, now uses Bitcoin to buy food. Although Cubans have their local currency, the peso, it is a piece that would be over devalued, which causes frustration among citizens when processing payments. However, with Bitcoin or other tokens, people can trade easily and have the possibility of making transfers to other territories.

The country seems to recover from the blockades imposed by the United States thanks to the crypto trade. According to reports, it is already more frequent to see Cubans using cryptos and various technologies developed by blockchain.

Rodríguez Nelson, who would be the owner of a commercial store, clarifies that the crypto market renewed his business, so he believes in it. Rodríguez clarifies that he can keep his funds protected from the government with cryptos, and the market is open enough not to be blocked in Cuba.

Recently, the main regulators in Cuba opened a legal scheme for operations in cryptos. According to reports, since April, crypto enthusiasts must be issued a license by the BCC to open their trading. In this way, the central authority seeks to appropriate transparency and anonymity in decentralized commerce.

However, a regulatory plan will not work, considering that cryptos have a solid decentralized scheme. Indirectly, people in Cuba are looking for an economical option with cryptos to avoid the devaluation of their currency while profiting from the stability of USDT. But investments in Bitcoin also facilitate passive earnings that would greatly help every Cuban citizen.

The cryptos also develop in the other countries close to Cuba, such as Puerto Rico and the Dominican Republic. Both territories have shared their perspective on the virtual market, where they agree that it has a good future ahead of it. However, they are also looking for a way to regulate their trade to avoid fraud or money laundering problems.

The crypto trade is experiencing a small recession, but according to experts in the field, it is a liquidation from which Bitcoin or other tokens will recover soon.