Crypto market cap below $1T, $350M longs liquidated, is it time to buy? 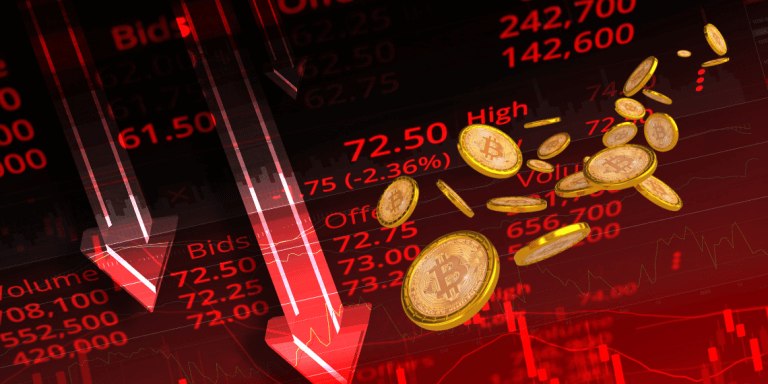 The crypto market is on the verge of another stock bloodbath. Bitcoin fell below $19,000 in the early hours of Wednesday morning, its lowest value since June. This follows a worldwide decline in stock markets, as well as the dollar’s continuing strength. The entire crypto market’s value dropped below $1 trillion, with digital coins across the board seeing a sell-off.

According to coinglass, during the last 24 hours, 101,536 traders were liquidated. The overall liquidations amount to $354.92 million. The largest single liquidation order took place on OKEX, with a value of $2.57 million for BTC-USDT-SWAP. Binance followed suit with crypto exchange long liquidations totaling $1.53 million.

Since yesterday, market valuation has decreased by 6.1% and is now sitting at $983 billion. This is the first time it has been this low since June. At its peak last November, the crypto market was valued at $3 trillion.

Crypto market sees yet another bloodbath

The crypto market in 2022 has been troubling for many investors, with consistent difficulties occurring throughout. In the past few days especially, investors have felt discouraged by the state of their industry. At 7:46 a.m., bitcoin was down more than 5%, and ether was down more than 9%.

Ether, which has far outperformed bitcoin’s rises in recent months, was at $1,513.64. Bitcoin continued its falls Wednesday, going below $19,000 per coin. In recent days, it had stabilized at around $20,000, leading some cryptocurrency traders to hope that was the bottom of the market corrections.

According to CoinMarketCap, Bitcoin’s price is $18,842.07. It has a trading volume of 39,461,836,808 US dollars in the last 24 hours. The crypto market is not the only one feeling pessimism today. The S&P 500 slipped 0.41% Tuesday as traders worried that the Federal Reserve could stay aggressive in its inflation-fighting efforts in the United States.

The world’s leading central banks are locked in a price war, attempting to curb soaring inflation with tighter money management. The Federal Reserve has raised interest rates by 2.25 percentage points over the course of 2022. Markets anticipate additional interest rate hikes.

The crypto market has faced hard times this year, with a value loss of almost $2 trillion since November. A general shift away from risk assets and issues specific to the crypto industry, such as failed projects and bankruptcies, have contributed to the decline of the crypto market.

The crypto market cap ratio of Bitcoin to Ethereum has fallen from a 2016 high of 20x to around 1.9x, indicating that Bitcoin is losing value relative to ETH. Ether’s market cap has expanded, as have the market caps of stablecoins and other layer 1 blockchains, which means that Bitcoin’s dominance is continuously decreasing in the entire crypto market ecosystem.

Altcoins and DeFi take a nosedive

The global economic outlook and an upcoming upgrade to the Ethereum Network have crypto prices breaking lower. In the meantime, ether and other altcoins have managed to surpass bitcoin.

Ether has outperformed bitcoin since the two cryptos suffered major losses in June. This month, Ethereum is planning a large upgrade called the merge, which supporters claim will make the network more efficient. Crypto market experts are optimistic that the forthcoming merge will attract more investors to the industry.

Many tokens linked to promising decentralized finance (DeFi) platforms were also sharply down. Cardano (ADA), Solana (SOL), and Polkadot all fell by 7% and above. The value of meme-based cryptocurrencies took a hit on the last day, with Dogecoin (DOGE) losing 6.3% and Shiba Inu (SHIB) 5%.

Can the Ethereum Merge save the crypto market?

September has brought poor crypto prices in the past, and this week follows suit by continuing the late summer decline. Recently, traders have been eyeing the upcoming Ethereum “Merge” to Proof-of-Stake as a mechanism that could help spur Ethereum’s and other related assets’ prices upward. Consequently, these assets like Lido and Ethereum Classic have seen significant growth.

The Merge, regarded as one of the most important crypto events of recent years, began Tuesday with the successful implementation of Ethereum’s Bellatrix upgrade, while the main event is expected to arrive around a week from now.

Even though Bitcoin has seen a decline in value, Ethereum and other assets have taken even bigger hits. Despite its summer gains, ETH is currently trading at $1,653, which is 69% lower than its all-time high.

Some people believe that the Merge narrative could help revive the market. Bitcoin is a big part of the crypto market, and investors are hoping that interest in Bitcoin will come back as it did for Ethereum this summer.

Even though Ethereum is stronger than ever before, it has not been able to escape BTC’s crashes in the past. It is difficult to see how the market will turn around and become bullish again for an extended period of time in the future.

This latest selloff just goes to show that even the most hyped-up event in the crypto world might not be enough to convince some people to invest. This is not to encourage crypto traders to give up. In fact, this is the best to buy crypto. The prices have never been this favorable.