Cosmos price analysis: ATOM/USD is bullish in the next 24 hours The daily Cosmos price analysis chart set in while the buyers controlled the ATOM/USD pair price, sending the prices upwards, forming a cup, and handle trends. The bullish momentum did not take long before the bears stormed into the market, causing the price to drop to the intraday lows of $30.7.

The Bollinger is wide in most trading sessions on the daily price analysis chart. This is an indication of a highly volatile market. ATOM/USD rice is leaning on the upper Bollinger band is a signal of solid bullish pressure.

The two most significant digital assets are trading in losses as the sellers control the entire cryptocurrency space leading to price dips. Bitcoin is down by -6.43 percent, while ETH has dropped by -6.21 percent. Other altcoins are also trading in the same trend, recording massive price deviation. The meme coin has recorded more than -15 percent price decline while Solan is trading at -12 percent. Despite most digital asset trading being bearish, some coins have recorded significant price gains in the last 24 hours. OMG is the hottest gainer of the day, recording 17 percent price surge.

ATOM’s price has now validated a trading range that spans the $30 to $36 levels, which is the previous zone of resistance. On the four-hour chart, we observed a little retreat following retesting of the prior high of $40. 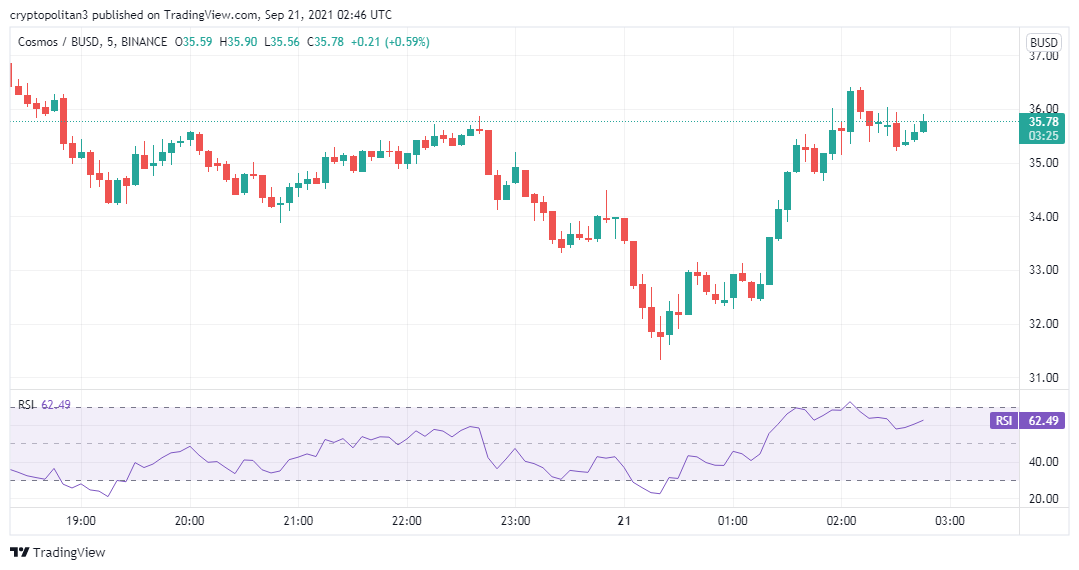 The market has seen a significant increase in buying over the previous seven days. A substantial drop on the 7th of September formed a new major swing low at around $18.

After several months of consolidation, ATOM/USD began to surge on the 24th of July. It continued to do so until it regularly reached new highs until the 12th of September.

ATOM/USD stopped the climb on Tuesday, retreating to the previous all-time high support level of $32.5, with several days of consolidation around the price area. On Thursday, the Cosmos price made another push higher, establishing a new low peak as bulls were not yet ready to go any further.

On the other hand, ATOM has continued to rise since the 23rd of August, pushing through several obstacles before finally breaking out of a short-term consolidation range in early September. The stock subsequently pierced through $40, establishing a new all-time high overnight at $41.5 on Sunday.

The price analysis of the Cosmos cryptocurrency is bullish, with the market setting a new all-time high overnight and presently showing a modest retreat. We should expect ATOM/USD to rise higher and establish further highs as long as we don’t see another downside.