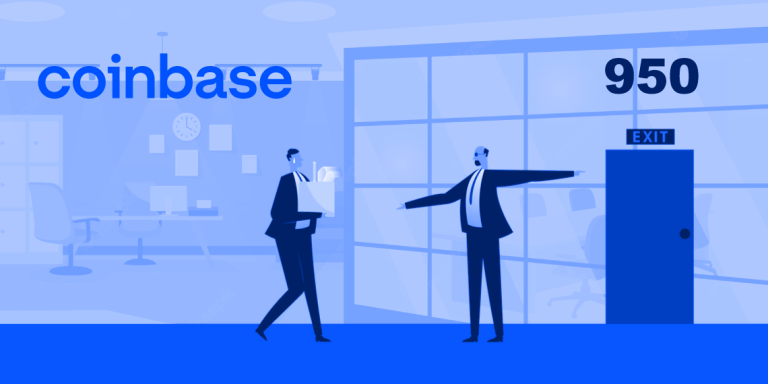 Coinbase is slashing a fifth of its workforce in its second major layoff, which totals 950 employees.

Coinbase is an American publicly traded company operating as a crypto exchange platform. All the company’s employees work remotely.

Amid the volatile crypto market, the company has faced a lot of scrutiny from regulators in the United States over its trading practices after the collapse of FTX.

Earlier this month, a New York regulator announced a $100 million settlement with the company after they revealed that they had significant shortcomings in their anti-money laundering and compliance protocols.

In January 2022, Coinbase planned to create 2,000 jobs across engineering, product, and design. Today its CEO shared that they would revert to their earlier startup culture where they used ‘smaller teams’ to move quickly.

Why Coinbase is slashing its workforce

In a phone call with CNBC, Coinbase CEO Brian Amstrong said they should have done more in hindsight. He pointed they based the move on information they received and had to act quickly.

According to a blog post published Tuesday morning, the exchange plans to reduce the headcount by 950.

Back in June 2022, the company made its first significant layoff sending home 18% of its workforce citing high management costs that arose from growing ‘too quickly’ in the 2021 bull market. By September 2022, the coin had roughly 4,700 employees.

The company also shared that it expected adjusted EBITDA losses within the $500 million guardrail set in 2022.

According to Brian, their annual revenue forecasts indicated they had to reduce the headcount to do well in the current market conditions. The company would also shut down projects with a low probability of succeeding.

Affected employees will receive emails on their emails and revoke access to company systems.

The company joined a string of other companies allowing layoffs. Amazon announced it would lay off 18,000 employees, while Salesforce fired 7,000. The theme repeated itself over multiple companies in 2022, including Meta, Twitter, Kraken, and Gemini.

In other news, the Coinbase stock is up 15% after Jefferies analysts said they believed the company would take up the market share of the now defunct FTX exchange. FTX was Coinbases’s most significant competitor.

Coinbase went public in April 2021, but its stock price has dropped. The stock COIN is trading at $38.27, a far cry from $341 during its public debut.

“If you look at the internet era, the best companies got even stronger by having rigorous cost management; that’s what’s going to happen here,” Coinbase CEO Brian Amstrong.

Uncertainties in the crypto market

The FTX contagion has created a black eye for the crypto industry. The impact will result in higher scrutiny of all companies in the sector. According to Brian, the scrutiny is a good thing for the long term, but in the short time, there is still a lot of fear in the market.

He also shared that the regulations would clarify their decision to go public in the US.

In 2022 Coinbase shares fell over 83%, while Bitcoin fell by 58%. The crypto market is quiet today but registered positive growth after we crossed into 2023.

The year has started positively, with coins like GALA and SOL making substantial gains. Will 2023 be bullish? Time will be the ultimate judge.