The daily Chainlink price chart began the day with the sellers in control of the market. The bulls created solid support at the low end of the day’s trading five minutes later, $25.4. The prices rose, as a result, forming head and shoulder patterns to the intraday highs of $27.5, which sellers established. At this point, The sellers found a significant barrier that the bulls could not easily overcome. The strong resistance by the sellers allowed them to dominate the LINK/USD market, resulting in steep drops.

Bulls have made several attempts in the last few hours to mount a comeback, but they have all failed. The bears remain in the driver’s seat and are making an attempt to bring the price down below $25.

ON the 5-day LINK/USD price analysis chart, The RSI was seen hovering towards the overbought region. This suggests that the market has generally been bullish in the past week. The long-term technical indicators show that the bull market that saw its way last month might continue through the year.

Chainlink price analysis has been bearish in the last 24 hours. However, bulls are attempting to break the negative trend and set the coin in upward momentum. The buyers are aiming to break past the daily resistance created at $29.

The bulls and bears continue to parallel each other, as the Chainlink price chart demonstrates, with constant rises and falls in value. The week’s decline was a retracement of bullish trends, but today’s report is in favor of the bears. With an average range of $23.23, the Bollinger bands are at $28.595. 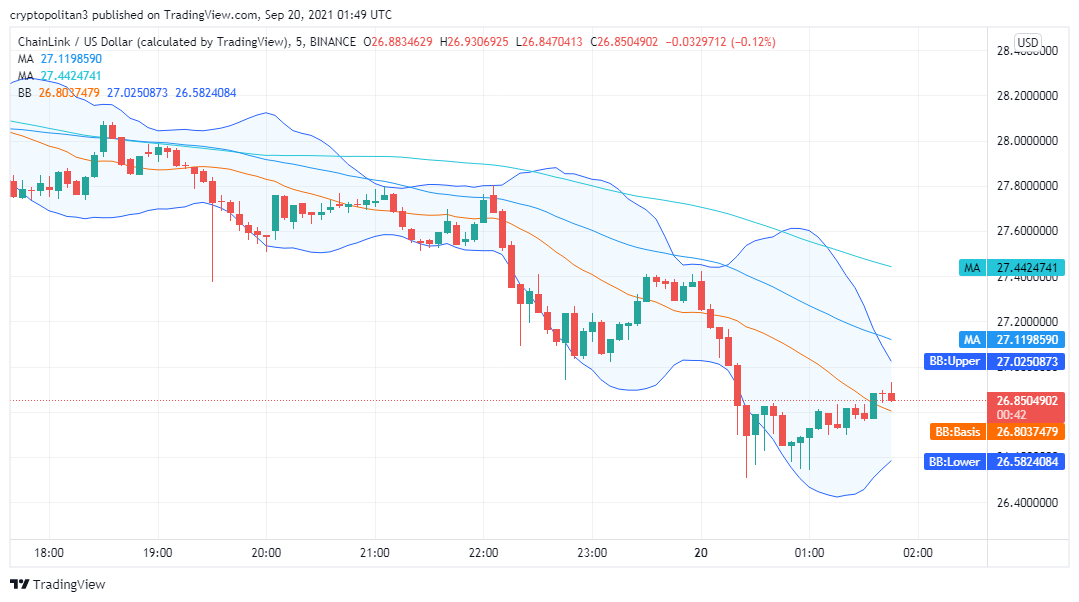 The moving average has adopted the bearish crossover pattern, suggesting that Chainlink will likely decline even more. The RSI indicator also signals that bears still control the market momentum even though bulls’ attempts to mount a comeback.

The Bollinger Bands are showing a greater degree of volatility. The upper Bollinger band is established at $28.06, while the lower band is at $24.8. Compared to 56.99, which is considered quite balanced and may rise if buyers appear, the RSI indicator has increased by two notches to 57.63). Meaning bulls are gaining momentum and are likely to come into the market anytime soon.