Cardano price analysis: We expect ADA to spike to $2.5 by midnight Analysis of the Cardano price shows that bears are attempting to reclaim their position and have already accomplished so far. The bulls were in control of the market last week when the price rose dramatically. But today, as per Cardano‘s price analysis, it is evident that they are losing their grip. Price prediction of Cardano shows an eminent drop is expected in the days to come.

With the bears currently attempting to take control, the price has fallen below the $2.29 level where it found support last week. The bulls had risen this value to around the $3 mark while being in control back then. But as per Cardano price analysis, the bears have taken over and are attempting to reduce further down to a lower level ($1.97).

Today’s falling price has brought new support at $1.97, following the support established last week at around the $2.18 mark, which is now acting as resistance for the bulls to breakthrough. The 100EMA can be seen trending downwards while attempting to cross below the 200EMA, suggesting that the latter will assist in guiding price movement lower soon enough.

Cardano has witnessed a significant rise in its price during the past week. As per the Cardano Price Analysis, another resistance level can be established at $2.29, following which a strong uptrend is expected to push the price even higher than the $3 mark. The RSI trend line at 53 suggests that the market sentiment is indecisive, and until it rises above 70, gains in Cardano can be seen.

The Bollinger Bands Indicator is used to determine how high or low the price of a coin will go. Generally speaking, when the bands contract, it indicates that volatility is dropping and that there is less likelihood of significant price change. But when they expand apart during times of low volatility, it means the opposite; i.e., prices are expected to move up significantly (as in the case of Cardano).

A contracting band suggests lower volatility, but currently, they are expanding, indicating that prices will move up. A Bollinger band squeeze occurs when the bands get close to each other but don’t touch. It indicates that price movement will become very volatile, and it could go either way (up or down). 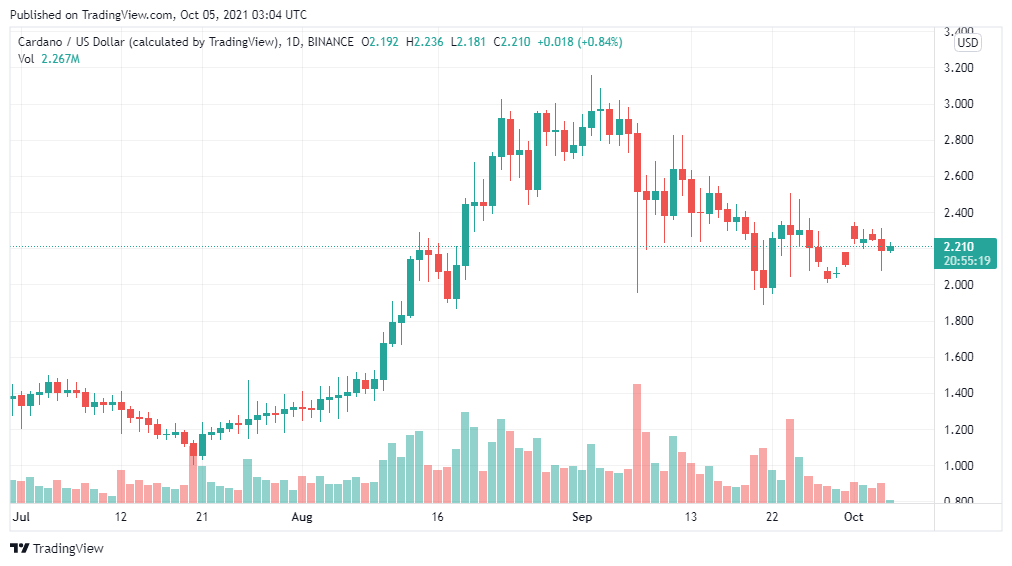 Cardano is priced at $2.23 and is falling against USD by 4.51% at the time of writing. The past week has seen it rise significantly, starting at around the $1.80 mark where it found support last week. But the price has now fallen to $2.23, as per Cardano price analysis. The previous week had seen it reach highs of around $3, but the bulls are struggling to do so again.

The ADA/USD chart indicates that the 100EMA crossed over the 200EMA form below to suggest bearish momentum, previously impeded by both EMA lines.

Cardano price analysis shows that the ADA/USD pair is currently trading at around $2.23 and has a downtrend that is expected to continue as the 100EMA continues trending downwards.