Bitcoin Rises 3.3% As of Aug 28, Attempting to Break Through the $7000 Resistance Level 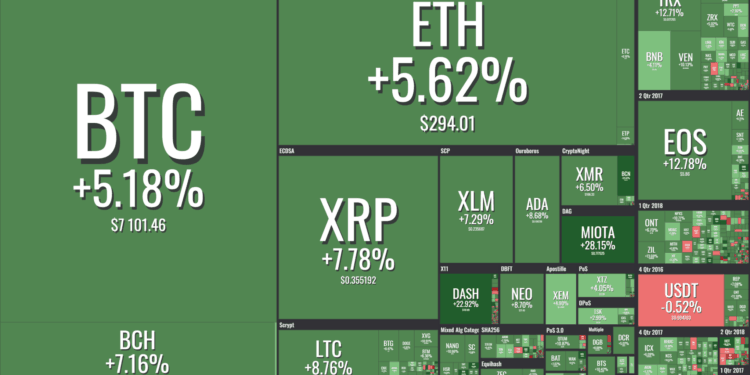 As if shaking off the negative sentiments after the Bitcoin ETF proposals was rejected By the U.S. Securities and Exchange Commission, the lead coin is surging towards the $7000 level. As of press time 08:40 UTC +01:00, August 28, 2018, BTC has already moved up by 3.3%, with all the other cryptos following the streak.

In reference to Cryptocompare’s data, Bitcoin is being traded at around $6,947, the highest since the 7th of August.

Despite the disapproval of the nine BTC ETF proposals by the U.S. Securities and Exchange Commission and the negative comments made  by the real “Wolf of Wall Street”, Jordan Belfort on Bitcoin, the crypto coin seems to be determined to breach the $7000 resistance. Also, the CME Bitcoin Futures’ expiration last Friday did not seem to affect the rise of BTC and some of the other cryptos as well.

With bitcoin’s upward trend, it seems that the crypto community was unfazed by the SEC’s rejection on the proposed Bitcoin ETF.  Perhaps they realized that it might be better off for Bitcoin’s long term well-being to stay as it is.

It’s hard to predict if this is just a short squeeze or a sustained bullish surge.   As it can go low and fast, it must liquidate some more shorts by going up to around 7200.  The real question here is: Is it a time for higher high or a lower low?