Bitcoin price may be all over the place but its fundamentals are encouragingly strong. Backed by a diverse user base, the coin retains the top spot as the most valuable. However, the only likely impediment to its immediate success is the trouble with infrastructure enablers.

Seemingly fractious, another in-fighting at NASDAQ-listed Canaan Creative is mere weeks after Bitmain directors had their power struggle, threatening to disrupt operations.

Although reports from China reveal a non-disruption of Canaan’s commercial operations, it is a blemish that, unfortunately, the community can’t resolve through BIPs—or even hash rate.

The rise of Bitcoin millionaires

Meanwhile, news from GlassNode shows a slight spike in the number of Bitcoin millionaires or whales.

These are individuals—and most likely early adopters, with direct control of over 1,000 BTC. Each trading at over $9,000, they can be rightly classified as millionaires.

Interestingly, the number has been on the rise a few weeks after a halving event. Halving reduced the number of BTC daily emissions by half from 12.5 to 6.25 BTC per block.

The Lightning Network can be exploited

Blockchain researchers from the Hebrew University of Jerusalem have warned that a flaw in Bitcoin’s Layer-2 solution, the Lightning Network, could see hackers loot the over $9 million worth of coins locked.

In a medium post, they explained a case where attackers congest the Lighting Network’s payment channels before stealing funds.

Unfortunately, in their analysis, they noted that the flaw can’t be fixed through conventional solutions.

“Payment channel networks are known to be susceptible to blockchain congestion, which may not allow participants to withdraw funds in time if they are being attacked.”

“In this attack, an attacker forces many victims at once to flood the blockchain with claims for their funds. He is then able to leverage the congestion that they create to steal any funds that were not claimed before the deadline.” 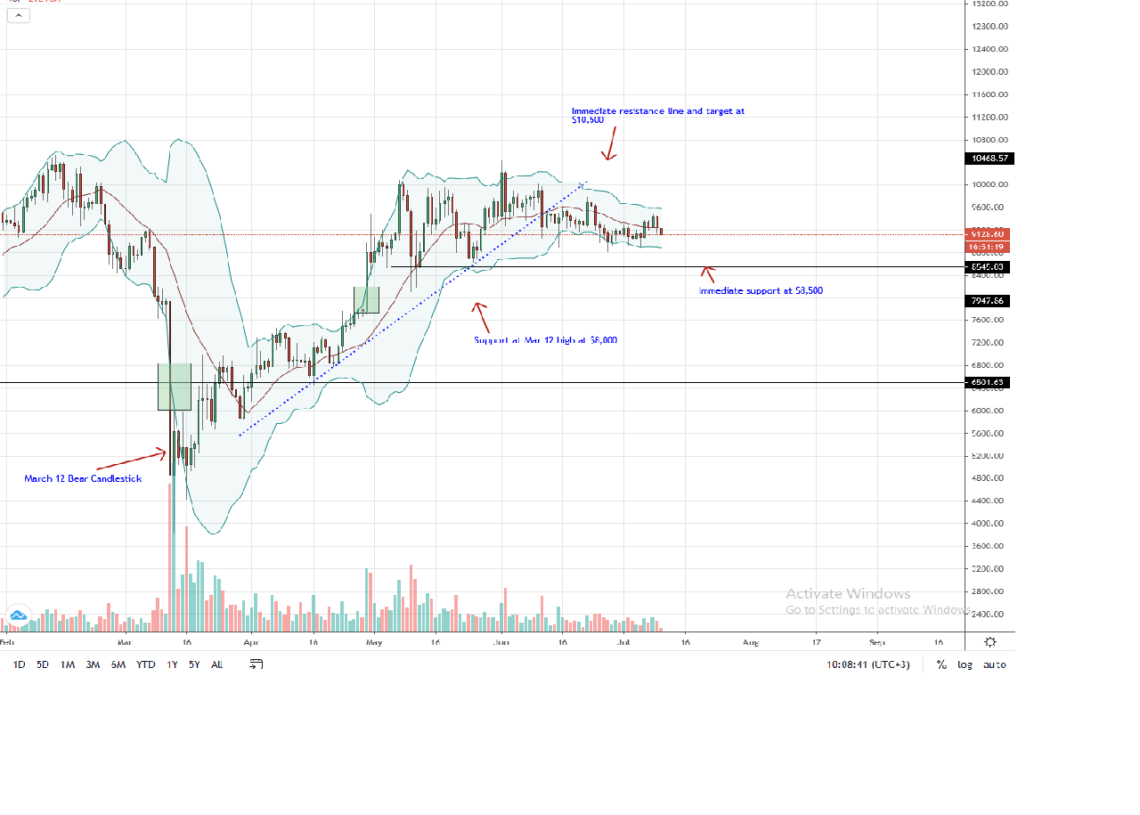 At the time of writing, BTC is trending within a narrow range versus the USD. Trending above $9,100 with decreasing volumes, the path of least resistance seems to be southwards.

From the daily chart, not only is volatility shrinking as BB bands squeeze, but the negative gradient of price action combined with the failure of buyers to breach $10,000 after several attempts may be a net negative.

Visible from the chart, the Bitcoin price is printing a series of lower lows against the upper BB. In a bear trend continuation following steep losses below the three-month support (now resistance) trend line of June 11, 2020, the reaction at around $8,500-$8,800 could determine the short-term price trajectory.