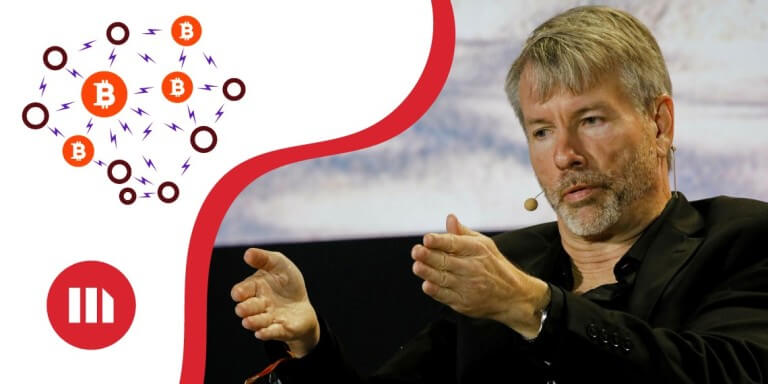 His words illuminated what the software firm is working on and planning for its future offerings.

Saylor highlighted that, as a part of his transition from CEO to executive chairman, MicroStrategy has been able to place further emphasis on exploring ways they can not just purchase and retain BTC but also contribute positively to the Bitcoin environment.

As they have ventured into developing software applications for Bitcoin and Lightning networks, MicroStrategy is utilizing its expertise to furnish businesses with the tools necessary within these ecosystems.

Our mission is to empower any enterprise with the capacity to rapidly deploy Lighting infrastructure in a single afternoon, empowering them to onboard thousands of customers or employees,” stated Saylor.

Our technology will allow seamless integration into their existing systems and provides an edge that forward-thinking CMOs crave.

In particular, the proposed solutions will bolster enterprise marketing and cybersecurity for corporate websites. However,  this is based on a revolutionary idea known as the “Lightning wall,” which utilizes Bitcoin-based paywall technology to protect web pages from unwelcome visitors by requiring them to deposit Satoshi before accessing the said website.

For example, those who want to visit sensitive company websites can deposit “100,000 Satoshi” as an assurance of secure passage. Immediately after the user finishes their visit, this sum will be refunded in full – a feature that credit cards cannot provide because refunds take time.

MicroStrategy CMOs can leverage the Network to motivate consumers with Satoshi rewards for reviews and surveys. The Lightning Network payment protocol based on Bitcoin’s blockchain is an efficient way of conducting off-chain transactions, allowing for enhanced speed and lower fees. Moreover, MicroStrategy firmly believes that enterprises will easily incorporate these lightning solutions into their businesses.

Mr. Saylor has also been exploring the possibilities of a Lightning version of “Netscape browse.” Again, he believes that someone will create an equivalent solution soon.

Also, it could likely involve a non-custodial wallet to store dollars and different cryptocurrencies. If such a system is established, it stands to benefit up to 100 million customers.

During his session in Twitter Spaces, Saylor highlighted that MicroStrategy’s upcoming Bitcoin event would include a “Lightning for Corporations” agenda to explore how the firm can contribute and promote adoption within the Bitcoin ecosystem. He noted that it should delve into their plans more thoroughly.

Saylor has supported the Bitcoin Lightning Network for some time, reiterating his faith in its potential to change the future.

According to Saylor, the strength of Lightning lies not just in its ability to take Bitcoin from millions to billions of users and reduce transaction costs significantly. Still, it also allows us to be innovative with application development on a much grander scale than we typically can at the base layer.

By taking more risks and introducing new features quickly, this ethos of bitcoin can remain intact without diminishing its core principles.

About the Bitcoin Lightning Network

The Lightning Network is an additional layer to Bitcoin’s (BTC) blockchain that facilitates off-chain transactions between two parties not part of the underlying network. This second level comprises many payment channels among users, allowing them to send BTC quickly and securely at a low cost.

The Lightning Network is an additional layer to Bitcoin’s (BTC) blockchain that facilitates off-chain transactions between two parties not part of the underlying network. This second level comprises many payment channels among users, allowing them to send BTC quickly and securely at a low cost.

Furthermore, the Lightning Network channel is a robust, two-party transaction protocol that allows partners to make and receive payments from each other. Layer two of this technology enhances scalability for blockchain applications, allowing transactions to be managed outside the mainnet (layer one) while still enjoying its decentralized security benefits.

Scalability issues currently hinder cryptocurrency’s widespread adoption. A blockchain system can handle up to billions of transactions per second (TPS) if appropriately managed. The Lightning Network facilitates this process with its transaction and settlement off-chain capabilities. Also, it enables new applications such as immediate micropayments that address the classic “can you buy coffee with crypto” dilemma.