Today’s Algorand price analysis is bullish, as we’ll likely see a continuation of the upside that started last week after a brief test of the $1.9 mark. As a result, after some more bullish reaction over the next hours, ALGO/USD is likely to test a higher high.

The overall market traded with mixed results over the last 24 hours. The market leaders, Bitcoin and Ethereum both traded in the red, with a loss of 2.88 and 2.99 percent, respectively. Meanwhile, Solana and VeChain (VET) dominate the market, with a gain of around 7.5 percent.

The price of ALGO/USD was fluctuating in a range of $1.85 to $1.90, showing mild volatility over the previous 24 hours. Volume has grown by 19.25 percent and is now at $214 million while the overall market cap is about $10.68 billion, putting it in the 19th position amongst the top cryptocurrencies.

On the 4-hour chart, we can see Algorand’s price action bouncing back after a brief retreat from $1.88. It’s probable that a higher high will be established before another drop of around 20% occurs in the next 24 hours. 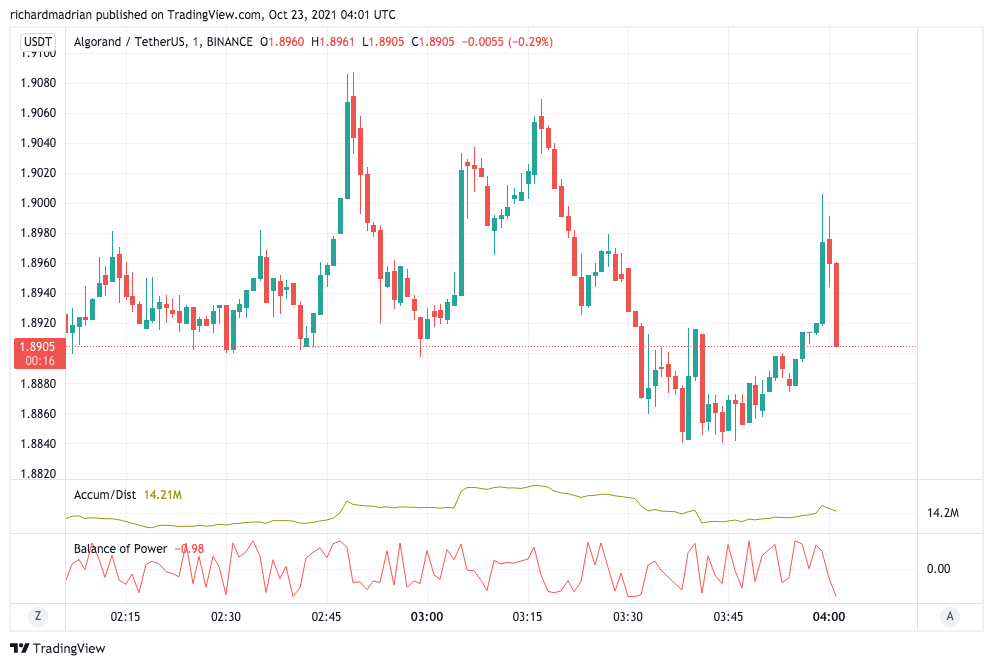 After a strong start during the first week, ALGO/USD’s price action has been bearish for most of October. The value peaked at $2.10 on the 4th of October, triggering an initial retracement.

On June 13, the bears took over and pushed the price to $1.54 on lower volume. The bulls fought back on June 14 by attempting to recapture lost ground, but a clear low was established below $2, resulting in another strong push down again to $1.60.

Last week, ALGO/USD retraced some of the falls and established another lower high below $1.90. The second test of resistance occurred on Monday, October 17th, with a further decline following the next day. Local support has now fallen to $1.70 after a drop in price through September 4th.

The price of Algorand is generally bearish presently, as we will almost certainly witness another local lower high in the next hours. From there, we anticipate that ALGO/USD will continue to fall throughout this week.