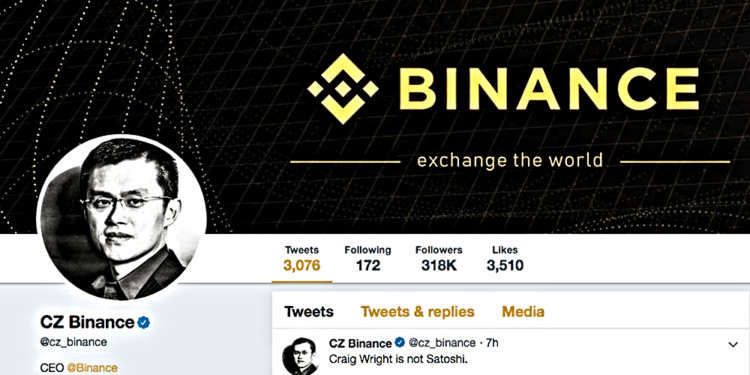 On 11th April Changpeng Zhao openly joined the list of influential figures in the crypto space who are against Craig Wright. Craig Wright just recently announced that he is suing another user account by the name of Hodlonaut for slandering.

Changpeng Zhao is the founder and CEO of Binance which is the largest cryptocurrency exchange by trading volume globally. Hodlonaut is the creator of the Lightning Torch Bitcoin transaction relay.

He had recently deactivated his account when Craig Wright threatened people on Twitter. Craig Wright has put a bounty of five thousand dollars ($5000) worth of Bitcoin Satoshi Vision (BSV) for the person who reveals the personal identity and information of Hodlonaut

This stirred up a lot of drama and chaos within the bitcoin community. The most prominent figure in the community is Changpeng Zhao. Because of the attention, many crypto users have changed their twitter handles to Hodlonaut.

There is more confusion about which account is the real one and this is making the process of doxing Hodlonaut hard. This just made Wright’s job to find the real person harder. Craig Wright is already a very controversial figure in the crypto space as he has claimed to be the creator of Bitcoin (BTC) and the person behind the pseudonym of Satoshi Nakamoto.

Changpeng Zhao is done with the drama and recently said that Craig Wright is not Satoshi Nakamoto and if this goes on anymore then bitcoin Satoshi vision will be delisted. Bitcoin SV trading volume has decreased significantly since Craig Wright introduced the threat of bounty and court proceedings for people who criticized him.

Craig Wright is not Satoshi.

Anymore of this sh!t, we delist! https://t.co/hrnt3fDACq

A podcast host Peter McCormack openly said that Craig Wright can sue him and Hodlonaut. Whereas other people are defaming Wright who has already a lawsuit of five billion dollars because he was accused of stealing a large sum of BTC from a partner

The BSV blockchain has a message on its transactions saying that Craig Wright is a fraud. Many think that if Binance did delist BSV it would only benefit it because of the free publicity the action will bring but increased publicity has always backfired in case of Craig Wright.