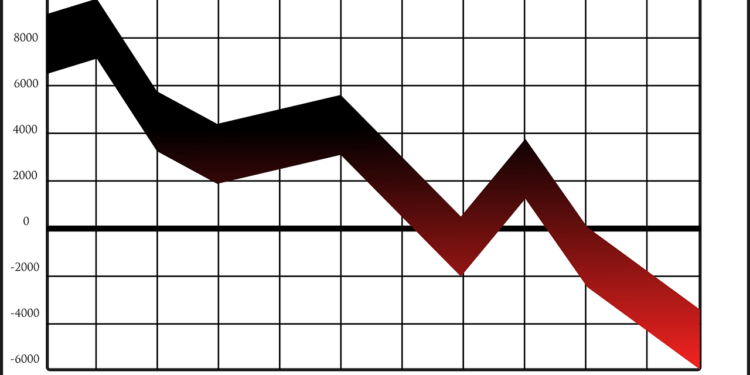 On the 5th of September, the crypto markets suffered a sharp dive in just 60 minutes as the market cap went down USD 12 billion, dragging majority of the top coins by market cap into the red.  This is based on the data from CoinmarketCap.

According to the Bitcoin (BTC) price index report by Cointelegraph, BTC has once again fallen below its $7,000 point level. The top crypto is down by almost 5 percent within the last 24 hours, traded at around USD 6,996 as of this time of writing.

Another crypto that has suffered losses is Ethereum (ETH)  as its price dropped under the USD 300 level. As of this writing, ETH is trading at USD 258, down 11 percent over a 24 hour period.

As the markets fell dramatically in 60 minutes, another dip is seen as the downtrend continues. In total, the market capitalization on cryptos is roughly USD 222, down from yesterday’s USD 240 billion.

Along with the market downtrend, BTC also saw significant growth in dominance once again, over other cryptocurrencies. Over the two week period, it currently amounts to 54.3 percent following an increase of 1 percent in such a short period.

Across the market, many of the leading altcoins by its market cap suffered average losses between an interval of 9 to 12 percent.

On the other hand, Bitcoin Gold (BTG) suffered smaller losses which are down by only 4.6 percent. Another Bitcoin hard fork, the Bitcoin Diamond (BCD) saw a significant growth over the 24 hour period by 110 percent.