A Symantec report reveals that the sextortion and bomb Bitcoin scams extorted over twelve million dollars ($12M) so far.

In a recent report by cybersecurity company Symantec, it was stated that across the last 12 months Bitcoin worth around a little short of one and a quarter million dollars ($1.2M) was paid through illegal means. These means included sextortion and bomb threat scams.

In sextortion schemes, people are sent emails consisting of an old password with the claim that their device is compromised. The email then states the sender possesses a picture or a video of the victim going through pornography content online. This was recorded through an allegedly hacked webcam.

Other times the sender would claim to be a member of some law enforcing agency that has found child pornography on the victim’s device. Then the scammer asks the victim to send them a specific amount of Bitcoin or else they will leak their photos or videos. Usually, this amount of Bitcoin is worth hundreds of dollars.

Furthermore, some scams include information about a hidden bomb at the place where the victim usually works. This alleged bomb will explode unless the victim sends the scammer a specific amount of Bitcoin before the working session is over. These kinds of threats ask for Bitcoin worth thousands of dollars.

Such a message published by Symantec is shown below. 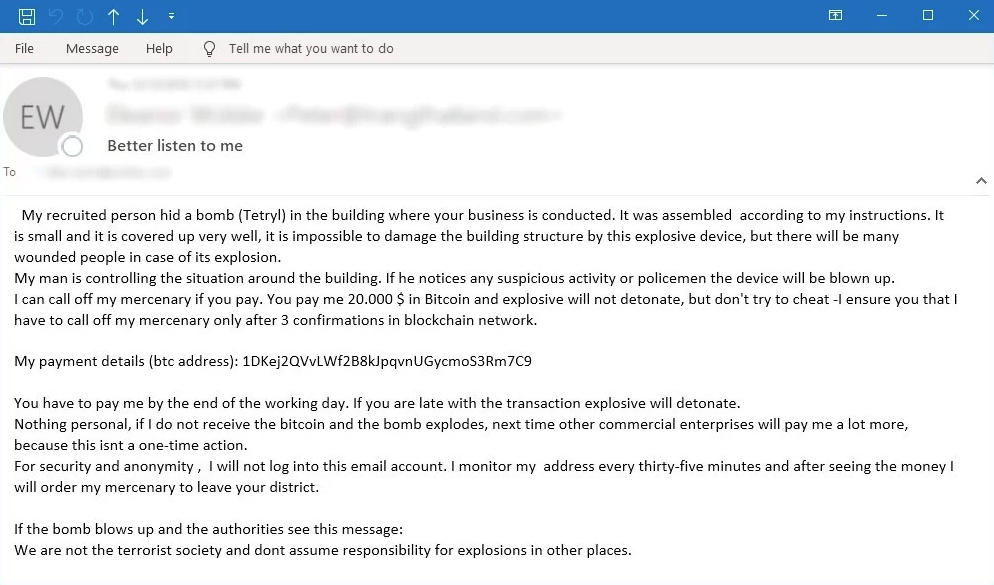 According to Symantec, these scams are not targeting specific people but rather people whose data they have access to. The data, including the victims’ addresses and passwords, were likely acquired through the recent data dumps of potentially sensitive information.

Symantec recorded that 63 such wallets received around one hundred, six thousand, two hundred and forty dollars ($106,240) in May 2019. Symantec then took May as average to determine the yearly income of 1.2 million dollars.