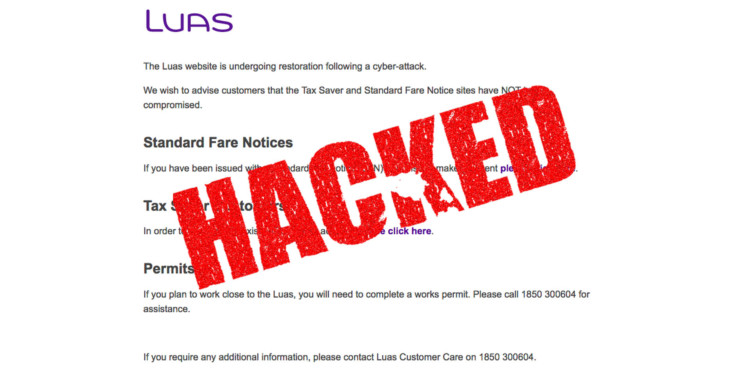 Cryptojacking is one thing, and ransom attack is another, and this time tram transportation service Luas operating in Dublin, Ireland is revealed to be the latest victim.

Former Europol cybersecurity advisor Brian Honan revealed in a tweet reply to the operator that the website has been hacked to extract a ransom of 1 Bitcoin. Brian, Ireland based cybersecurity expert, however, did not reveal the source of his information.

Apparently @luas website has been held to ransom by an attacker who claims to have breached its security and will publish customer data if Luas do not pay a ramsom of 1 bitcoin https://t.co/2f6e6EYsIP

Earlier on, the tram operator had revealed that their website is compromised advising the users not to access the website and check their Twitter profile for any updates on travel schedules. The Tweet went on to encourage telephone calls on the operators 1800 number for travel related questions and concerns.

Replying to Brian, the operator neither confirmed nor denied that the website is indeed hacked for ransom and reposted the same notification.

Media reports revealed that the while the website was under hacker’s control the message announcing that the website is hacked and 1 Bitcoin should be paid in ransom against the customer data. The anonymous hacker also threatened to send emails to Luas users.

From the message, it appeared that the hacker was likely to be a cyber expert since the message also claimed, “…I wrote that you have serious security issues”. Apparently, the staff at Luas had decided not to pay heed to the warning that leads to the cyber attack.

The website is now down for users with a message that the website went through a cyber attack and is currently undergoing a restoration process.

Luas is also assuring on the website that the “Tax Saver and Standard Fare Notice sites” were not compromised and all the notices stand to payment with instructions on how to make the notice payment. The company also Tweeted about the website.

The Luas website was compromised this morning , and a malicious message was put on the home page. The website has been taken down by the IT company who manage it, and their technicians are working on it. Luas are informed this may take the day to resolve.

There is however no explanation on the hacker’s identity or whether or not the company paid the ransom to recover the website.