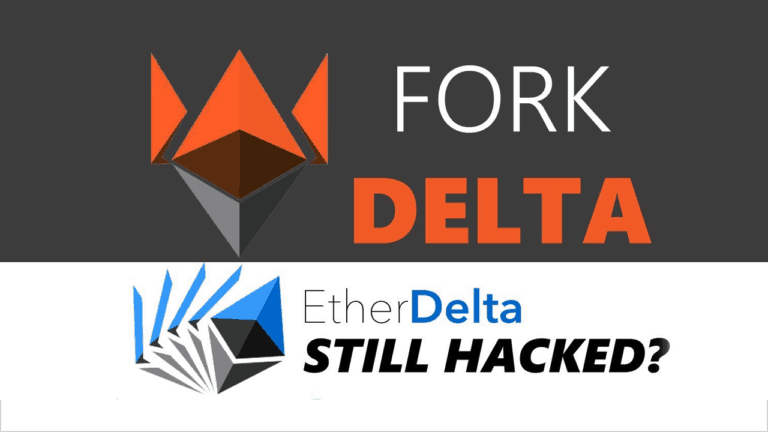 How to use Etherdelta has been a long-standing query of users. Etherdelta is one of the first decentralized exchanges (DEX) to launch on Ethereum back in 2016 and as such is notorious for its overall lack of appeal, clunkiness and just simply how badly put together the entire thing is. Also, trader focused exchanges that rely on order books/order matching engines and speed of execution aren’t really compatible with the workings of a blockchain-based platform like Ethereum.

Such exchange if operating on-chain fully would end up being prohibitively expensive (gas paid for every operation), unreliable and slow, which is the reason why people have been willing to sacrifice decentralization and security for the efficiency and speed of centralized exchanges.

Although much progress has been made since with new generation hybrid exchanges that centralize the order book components but keep transaction settlements on-chain (or other such variations involving side-chain constructions, etc.), decentralized exchanges are generally not trivial to use due to the underlying infrastructure they build upon.

Features of the EtherDelta Exchange

One of the site’s most distinguishing features is its use of smart contracts. Users do not need to open an account on the site as functions such as deposits, trades, and withdrawals, are performed via smart contracts that only require a user to integrate a wallet on the site.

EtherDelta is more decentralized than other mainstream exchanges, and the site also uses a compact interface that takes some getting used to. The front page contains all the relevant features, including the wallet, order book, and price chart, and users do not need to navigate to any other pages in order to complete their trades. 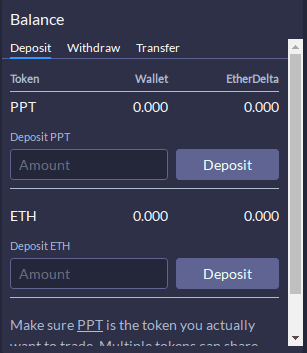 Operations on the Exchange

3. Then in the upper left corner there is a Balance panel with three columns, Token, Wallet, and EtherDelta. The first column, Token, will have a row for the token you’re looking at and a row for ETH. The Wallet column shows the balance held in the account just linked.

4. Next enter the amount to deposit and click Deposit (remember to have enough ETH left to cover following transaction fees).

5. If depositing a token, since the ERC-20 standard follows a different logic from ETH, the process involves two back-and-forth transactions that must be approved, one to approve the EtherDelta contract to make the transfer on your behalf and the other the actual depositing operation.

6. Once the transactions are confirmed, you will see funds move from the Wallet column to the EtherDelta one.

If you are using MetaMask, which is recommended both due to its built-in security (detecting malicious sites and insecure tokens, etc.) and ease of use, you will have to approve any executed transactions and can also adjust gas prices (from the “Gas price” item in the account drop-down) from default to optimal (~4 gwei), if willing to wait longer for transactions to confirm.

To withdraw funds do the reverse operation via the Withdraw tab (remember that you pay the gas fees from your Wallet). For transferring to another address using the Transfer tab filling in the amount you want to transfer in the first box and the address to transfer to in the second one.

To trade with other tokens choose the one you want to trade from the drop-down tokens menu in the upper left corner (tokens are priced in ETH, not fiat currencies). The order book stacks buy orders in green and sell orders in red. The exchange allows matching against just one order per transaction, so there’s no market buy orders (but partial fills are allowed).

If two orders are traded at the same time, the one that is confirmed first gets the trade. A failed trade registers as an error at Etherscan, but the gas for the transaction is consumed. This already illustrates the engineering challenges decentralized exchanges on Ethereum pose. 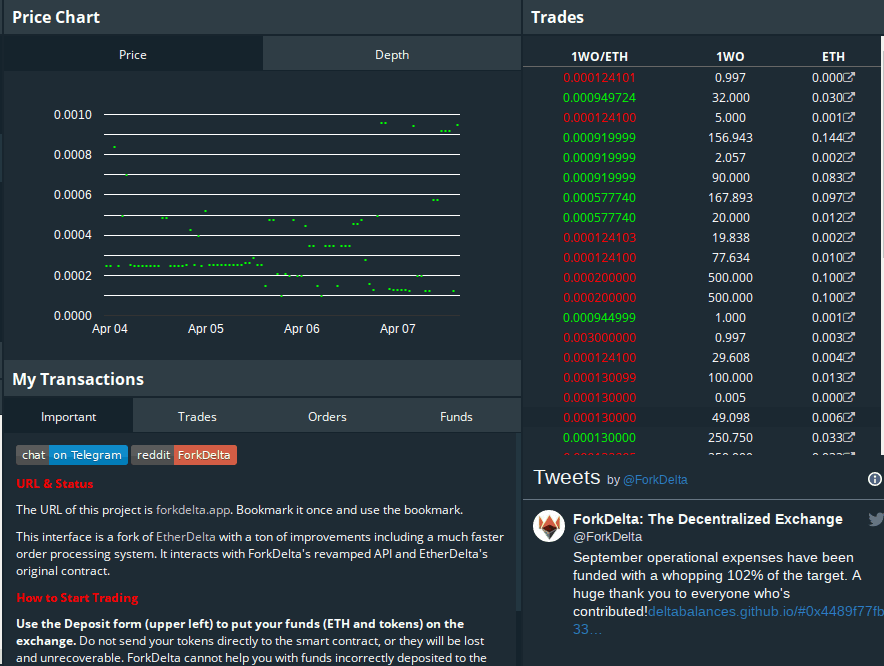 Placing an order involves the signing of a message and doesn’t involve a transaction. Select the Buy or Sell tab depending on the kind of order you want to place, fill in the amounts and submit the order. The fourth box in the order form is the number of blocks until the order automatically expires (default is set to 10,000 which is about 2 days). After the order has been received it takes a minute to appear in the order book. EtherDelta doesn’t do order matching and the only way to make a trade is by manually selecting it. Orders are canceled from the order list under My Transactions > Orders tab.

Much developments and improvements have taken place on Ethereum since EtherDelta has launched and defipulse.com curates a growing catalog of the Ethereum #DeFi (“decentralized finance”) stack including only reliable, non-controversial and sufficiently decentralized applications.

The protocols they use implement mechanisms reflective of the logic of the underlying platform and have the property of being interoperable and composable – a crucial precondition for cultivating a vibrant ecosystem. 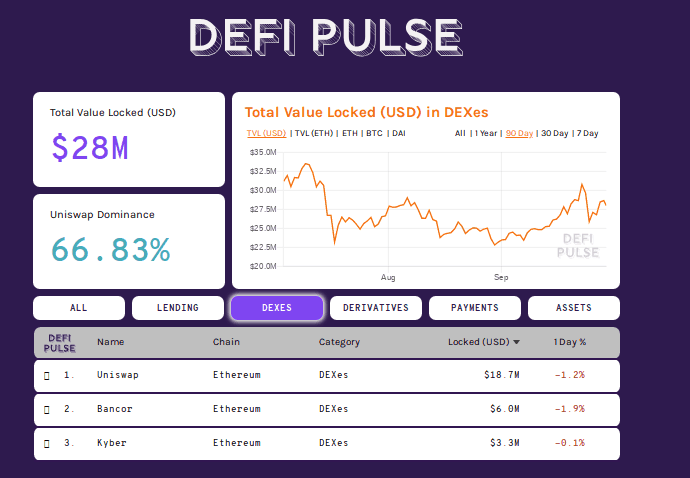 While the decentralized exchanges in the list offer liquidity pools and instant swaps for a range of tokens that there is a use case and market for there are also trader-oriented ones not yet listed. Leverj is one such implementation of a non-custodial hybrid DEX running on a custom side-chain. As geared towards trade Leverj is designed for low-latency and high-speed. The mainnet beta is running live at live.leverj.io.

Etherdelta is one of the earliest attempts to structure an on-chain exchange on Ethereum and for some time had even been one of the few liquid DEXes, but even so that had been due to a large number of available ERC-20’s (Ethereum token standard) and the fact that most ICOs at the time would have their tokens first listed there soon as the crowdsale concluded.

Eventually, Etherdelta got sold to Chinese individuals at which point maintenance and support of the platform went to a halt and the new owners went on to pull off what appeared to be an exit scam ICO in December 2017 (the EDT token). Immediately after the site became a victim of a DNS hacking attack which replaced it with a convincing fake that re-directed any traded tokens to the attacker’s wallet (traced to this address), following which the website went down for about a month. It would be interesting to know how to use Etherdelta then. This occurred again sometime August 2019.

ForkDelta was launched as a reaction to these events with most activity moving over, but neither of the two exchanges seems particularly alive or liquid today. ForkDelta is still using the EtherDelta contract back-end (seen here on Etherscan) as to avoid the legal risks of running an unlicensed security exchange (as the SEC had fined original EtherDelta founder Zachary Coburn earlier for almost 400 000 USD) and the fees the contract accumulates go to the scammers that sank the original EtherDelta exchange. Which really makes you wonder why people

The improved ForkDelta interface interacting with a revamped API and the original EtherDelta contract. While the fees go to the said contract, the operational costs of ForkDelta itself (of about 1,000 USD in Dai per month) are paid from user contributions.

Older DEX protocols tend to be plagued with illiquid and inactive markets and perhaps one of the few reasons anybody would be using EtherDelta today is to either source out or hope to sell some obscure or forgotten ERC-20 since the days of the ICO Keynesian beauty circus and empty promise tokens flooding the market appear to be over. And neither have there been any changes in the tokens listed since EtherDelta was sold in December 2017.

ForkDelta with the same user interface

The UI itself has not been updated any orders or trades since February this year, going to show the exchange has been completely abandoned. ForkDelta is used instead which has roughly the same user interface. 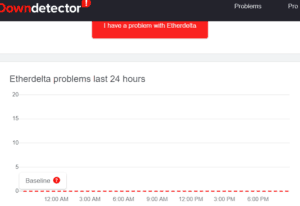 As one of the first DEX protocols on Ethereum, EtherDelta is far from ideal and unsurprisingly didn’t take long until running into legal troubles and backstage machinations. Generally, decentralized financial instruments and products require some degree of technical literacy to operate. The same basic security/privacy hygiene routines apply (keeping private keys safe, using strong alphanumeric passwords, making sure the URL is not a phishing site, etc.).

This is why DeFi apps tend to mainly attract the more geeky types, among which the naughty 4chan culture having constant presence looking for opportunities to exploit and practical jokes to pull.

ForkDelta was forked off EtherDelta with the intention of disassociating with the issues (technical, legal, reputational and otherwise) that had piled up over at EtherDelta, but due to the legal risks associated with running an unregulated securities exchange, it still uses the original EtherDelta contract.

The EtherDelta saga itself continues as Chinese police have recently launched investigations after the exchange’s Chinese owners have allegedly been planning to pull off another exit scam. So, would that still encourage you to use it?

Overall, it’s an exchange mainly used for sourcing tokens that have either just launched or haven’t been listed anywhere else. It’s also possible to have one’s token listed on the exchange easily. In summary, not really recommended for use.