CZ grilled on Bloomberg TV, sets the record straight, and shows he is the boss 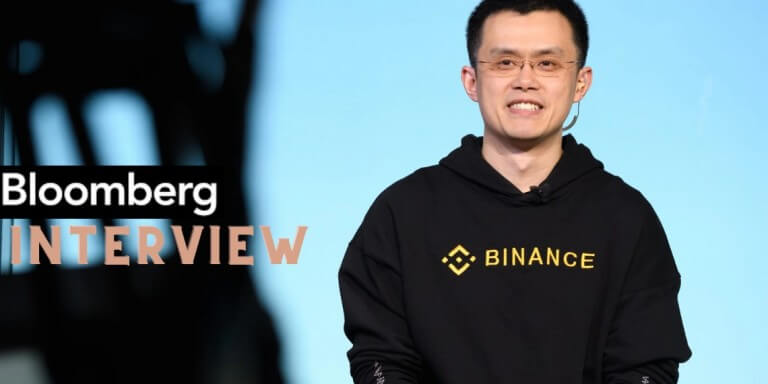 In recent times, mainstream media outlets have dominated the crypto market with false information. Changpeng Zhao was in an interview with Bloomberg TV and Radio a while back and he has made a point to clear the air. Additionally, he has circled in on a few interesting details regarding the present state of the crypto market.

After his Coinbase remark, CZ was dubbed a villain on Twitter for a few days. However, it is evident following today’s interview that Zhao is the crypto industry’s boss. CZ is confident that the crypto industry will thrive and endure for decades. He has few regrets, but one thing is certain: he fully understands how the DeFi ecosystem functions.

In the first place, the market has been weakened by the contagion caused by the FTX collapse. Other dominoes are likely to fall owing to liquidity issues, just like Terra did. When asked about the next big fish to fall, CZ clarified that the crypto industry will experience further contagion.

I think we will see a little bit of contagion. Whenever one big player goes down, especially a crypto trading platform, there are other people and institutions with money on the platform. We have seen Genesis halting withdrawals […] I think there probably will be one or two more[…] i dont know how many.

According to recent reports, Genesis Global Capital has confirmed that it has recruited the investment bank Moelis & Co. to explore ways to strengthen the liquidity of its crypto-lending company. The entity seeks to satisfy customer needs and find a route out of insolvency.

Due to its exposure to the defunct cryptocurrency exchange FTX, Genesis spent the majority of November rushing to obtain funds or strike an agreement with creditors. The institutional lending division of the corporation was compelled to cease redemptions and new loan originations last week. Additionally, Genesis stated previously that its derivatives division held around $175 million in locked money in its FTX trading account.

The infamous deleted tweet on Coinbase’s BTC holdings: This tweet has given CZ a villainous reputation for days. When asked about it, CZ responded as follows:

I dont think I tweeted about Grayscale and also I didn’t say there were liquidity issues on Coinbase. I was just referring to two articles [the disparity in holdings 650k and 600k BTC holdings] I understand that the exchange is separate from the custody. So I just posted it as a question […] that caused a lot of misunderstanding in the community so I deleted the tweet.

Following the Twitter outcry, Changpeng Zhao was accused of eliminating rivals and establishing a solo empire. This is a concern that Bloomberg highlighted, putting Zhao in a tricky situation. He explains that, in contrast to traditional finance, decentralized finance requires greater holdings transparency because nobody knows anything for sure. Here is what he had to say about the FTX incident, and it is filled with regret.

Actually I reflect on the FTX situation and I kinda blame myself for tweeting that too late. I think as an industry we let FTX grow too big before we questioned it about those things. I am taking the approach where we ask questions earlier.

Keeping up with Changpeng Zhao

Good news are headed to the crypto industry today.  CZ revealed last week that Binance would be establishing a recovery fund to assist projects that are otherwise robust but are experiencing a liquidity problem. According to Zhao, a blog post with significantly more information will be published before the end of today.

We are going with a loose approach where different industry players will contribute as they wish. We are restructuring so that it can be quite public.

Additionally, Zhao has blasted Bloomberg for publishing a false report about him and his recent business trips to Abu Dhabi. “That Bloomberg article was wrong and inaccurate.”

CZ has announced that the Fund will be established much sooner than anticipated. “The industry needs saving now and not in 2023.” In a few months, he predicts, the industry will have recovered if the damage is rectified more quickly and effectively.

His offer for FTX assets arose as a second key topic. On that note, he has indirectly called SBF a fraudster. He believes that there are aspects of FTX that can be salvaged. Others not so much. Zhao and Binance have left enough room to consider FTX purchases when the assets go up for sale. He addressed FTX books and stated:

So we look at the data room, to be honest, we became quickly aware that there were a lot of funds missing [..] to the tunes of double digits billions. Given the amount of customer funds they had, they must have moved the customer funds. At that point, we think there is fraud involved [..] and when you are dealing with a fraudster I couldn’t trust any information in the data room […] I dont believe any information we got was accurate.

And when asked if the crypto market would survive if Genesis tanked he said: “The industry will survive. The industry will have no issues […] this is the beauty of decentralized finance, when one player goes down another step up to fill the market share.”