Another week comes to pass as Bitcoin price hovers at the ten thousand dollars ($10,000) mark and past twenty-four hours (24hrs) have been no different than the price action across the week.

Bitcoin (BTC) price plunged down to the low point of nine thousand seven hundred and sixty-eight dollars ($9768.06) mark at one point while the highest point was recorded at the ten thousand four hundred dollars ($10400) mark.

Whereas the weekly high is recorded at the ten thousand nine hundred and twenty-nine ($10929) dollars on the 20th of August but the price has not been near that point since. Bitcoin is trading at ten thousand one hundred and three dollars ($10103.25) at the time of writing. 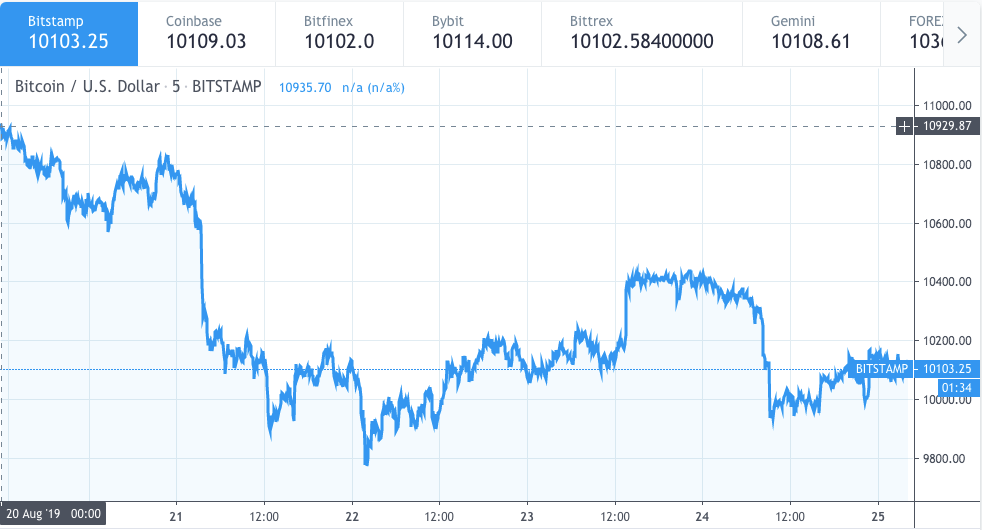 Cryptocurrency analyst and trading expert BitFink revealed that a bearish divergence can be seen on the Bitcoin cryptocurrency charts. The idea is simple and so far it has been keeping the BTC price afloat above the ten thousand dollars ($10,000) mark.

BitFink is of the view that short bearish divergences in the BTC price action are what keep the Bitcoin price above the psychological limit of ten thousand dollars ($10,000).

However, as evident in the chart above, if the Bitcoin price action falls into a corrective action the price is ready to fall down to the nine-thousand seven hundred and fifty-nine dollars ($9759) mark.

Below that point is the twenty (20) day low standing at the nine thousand four hundred and seventy dollars ($9470) mark.

On the other hand, twenty (20) day exponential moving average (EMA) stands at the ten thousand and thirty-three dollars ($10,033) mark. This is the point where the BTC price has been finding support over the weekend.

The weekend is still young and the BTC price can sway in any direction. Let’s see where the dust settles as the weekend comes to an end.