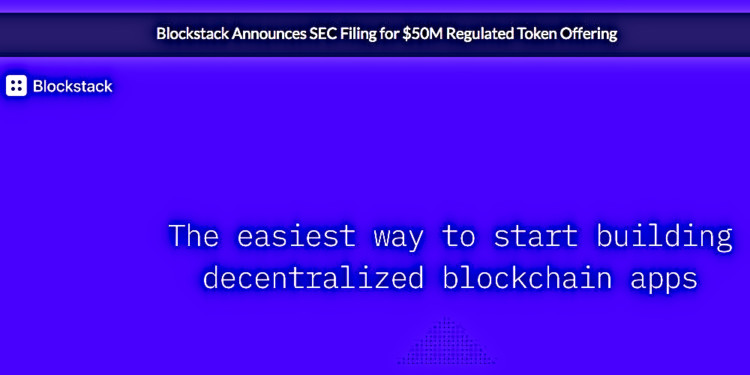 In 2012 under the Jobs Act, the regulation A+ exemption has been introduced that enables equity crowdfunding campaigns in order to offer and sell securities to U.S. investors by two grades twenty million dollars ($20m) and fifty million dollars ($50m), each over a 12 month period. By filing an offering statement with SEC the company can offer A+ regulation.

For the increase of fifty million dollars ($50m) USD token sale that would ultimately provide leverage for regulation of A+ crowdfunding – Blockstack the New York-based Blockchain software created infrastructure for the decentralized internet. Blockstack has 21 employees and total assets of thirty-two million dollars ($32m). The sale would allow the Blockstack to increase the capital that would take place via a subsidiary, however, this initiative still needs regulatory review.

Blockstack stacks (STX) token is more convenient in security than IPO. The company claimed that for developing the app ecosystem and decentralized computing stack the total worth of the offerings will be utilized. In total, 295 million STX tokens will be offered at $0.30 each.

In past times one of the New York-based companies was skeptic about the token sales to the private investors because they thought that it would not create diverse participants which are a pre-requisite for the creation of a truly decentralized network.

By the increase of fifty million dollars ($50m) by a sale of 440 million tokens the company was forced to capitulate its ambition. It was reported that more than 800 people were part of this sale and investors include; Union Square Ventures, Blockchain Capital and Foundation Capital.

The Co-founder and CEO of the company affirmed in his statement that they are trying to create a legal framework so that the Blockchain protocols comply with SEC regulations and for this purpose, they are collaborating with security lawyers and he added that this initiative would be helpful for the establishment of a decentralized ecosystem.