BitMEX’s big whale was picked up by WhaleTrades, a popular Twitter account that tracks large cryptocurrency transactions. The account revealed that a whale has sold $5 million worth of Bitcoin at $9,749.69.

Right before BitMEX’s big whale initiated the sell order, Bitcoin broke above $9,880 to set a new yearly high. Unfortunately, the market quickly corrected, bringing Bitcoin back down to $9,760 just minutes later, leaving many with the impression of a pump and dump scheme.

However, a pump and dump seems unlikely. Crypto trader Salsa Tekila had warned the community of a potential Bitcoin flash crash right after identifying a long-wick candle formation on the coin’s short-term charts. The trader stated he would be selling all his Bitcoin positions because the apex cryptocurrency was looking poised for a “flashdump.”

However, Bitcoin has been teasing the $10,000 mark for some time now, leading many to wonder when the coin will finally break through this resistance level. The bullish sentiment is still strong, however, as several altcoins have been reporting double-digit gains.

Furthermore, recently published data by monitoring platform Skew Markets has revealed that Bitcoin futures with a May 2020 and June 2020 expiry date are edging their way to $10,000. This reinforces the idea that Bitcoin’s recent bullish trend could continue for the foreseeable future. 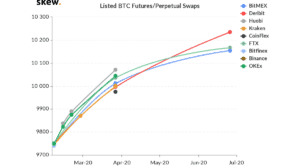 Additionally, BitMEX is reporting a surge of interest in Bitcoin futures, with open interest spiking by 60 percent since the start of the year, rising to a new yearly high of just under $1.5 billion ($1.43 billion). Open interest refers to the size of the contracts that buyers and sellers have opened on the exchange.

Watching whales has been a very exciting hobby by crypto enthusiasts – to what end? 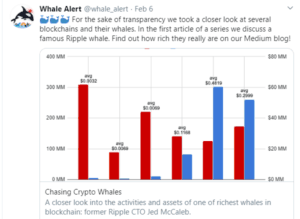