Apparently, a twenty thousand Bitcoin transaction is what it takes to bring Bitcoin price above the most awaited five thousand dollars ($5000) mark. The largest currency leads the market, and the very close cousin Bitcoin Cash (BCH) is also enjoying a good run of greens while it lasts.

BCH has reportedly had an increase of almost twenty percent (19.27%) price increase in the last twenty-four hours of the recent bulls. Bitcoin is also holding strong at five thousand and twenty-four dollars ($5024) above the $5k mark. While Bitcoin price, BCH price, and other altcoins are enjoying a boost there are some unfortunate altcoins such as Ethereum are already falling to the reds.

Experts believe that the sudden Bitcoin rush has done its part for the crypto sphere and the ripple effect in the industry is now over. It means where the currencies did get a push from Bitcoin surge, they have to perform individually to be able to sustain in the market.

This also supports the dot com bubble theory that believes that cryptocurrency has had its dot com moment and now the industry would get leaner but more focused. Smaller players are believed to perish while those able to sustain would lead the cryptocurrency and blockchain industry into a new era. 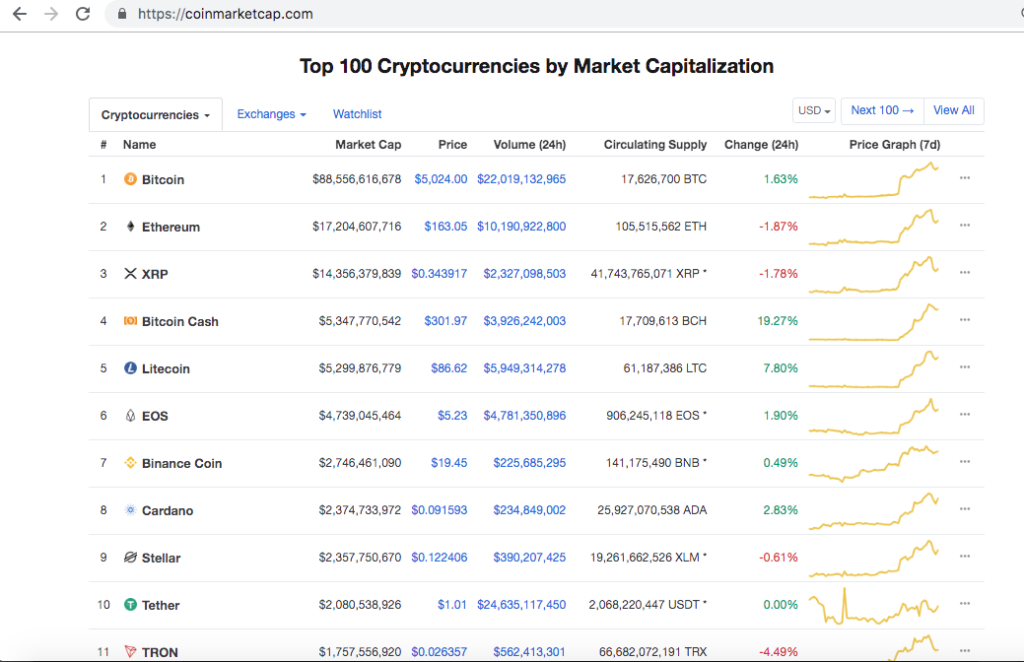 Ripple, Stellar, and TRON among the top ten cryptocurrencies and Monero, IOTA, Tezos, NEM, Ethereum Classic, and Zcash are among the currencies dropping at the moment. Dogecoin, on the other hand, is enjoying almost twenty-one percent (21.95%) increase, sitting at the 22nd place in the Coin Market Cap top hundred list, at the time of publishing.

Market experts are however trying to be more cautious than the past. Most analysts believe that the sudden current surge in the prices can prove to be another bubble since the company while a Bloomberg piece calls to completely ignore the situation, certain that the prices will go back to the three thousand dollars to four thousand dollars ($3000 – 4000) range. This was after the market fluctuated for Bitcoin during the initial surge.