There has been a drop of twenty billion dollars ($20bn) in market capitalization and Bitcoin, which had maintained a good position; dropped down a thousand dollars in a matter of hours.

Crypto-world is volatile and is continuously fluctuating, therefore, any speculation about the price of any coin is not certain.

The abrupt decline is said to be because of 5000BTC sell order at the front of Bitstamp as indicated by many tweets.

massive sell order at the front of BitStamp pic.twitter.com/RgOviG3a6p

Many people are sceptical as dumping thirty-six million dollars ($36,3mn) of BTC and flash crash the crypto-market was a shocking scenario.

The probable cause of this would be market manipulation. Also, there can be involvement of BitMex as it utilizes Bitstamp and Coinbase in its price index.

Some think that Bitfinex can be involved behind this issue as the judgment timings of the New York judge about tether coin to cut the transactions to it, matched perfectly with this ‘Flash Crash’. 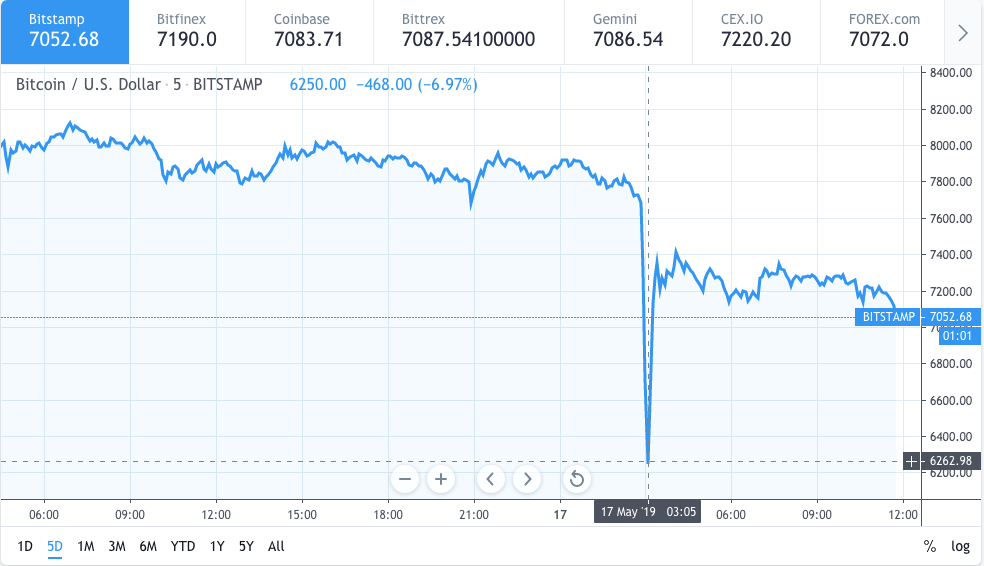 The Crypto compare data shows that there is almost 8.9% decline in the price of bitcoin since the last 24-hours. All coins have suffered greatly and depreciated up to 6% and 14%.

This drop is considered to be temporary as on the broader horizon the crypto-market is performing well as the BTC price has raised to 39.3% in the last 30 days that shows long term bullish trend for this coin.