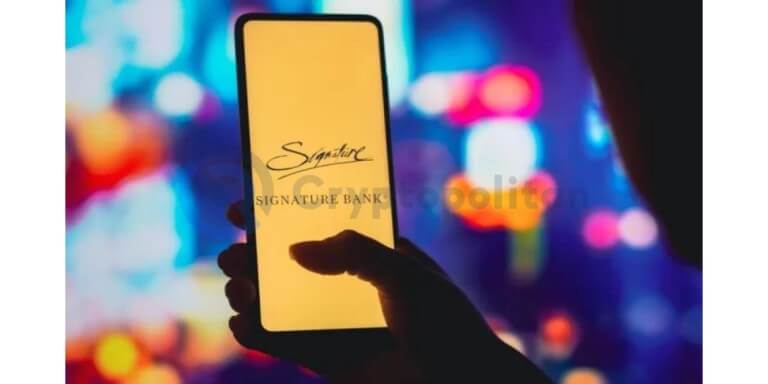 According to a Bloomberg report, the biggest cryptocurrency exchange, Binance, has announced that Signature Bank would no longer process customer transactions worth less than $100,000 as the bank reduces its exposure to crypto markets.

This action applies to retail traders whose accounts are handled by Signature, and the exchange has assuaged client fears by assuring them that it is actively looking for a replacement partner to handle SWIFT transfers denominated in U.S. dollars.

When it comes to international bank transactions, SWIFT is the method that is used the most often.

As a result, some individual users may not be able to use SWIFT bank transfers to buy or sell crypto with/for USD for amounts less than $100,000.

SWIFT is a network that facilitates the transfer of information and instructions between various financial organizations. According to a spokesman for Binance, none of the exchange’s other financial partners have been affected.

The Binance banking partner has had it rough recently

Over the course of the last year, Signature Bank’s value saw a decline of 64%. The New York-based bank made the announcement in December 2022 that it intends to remove up to $10 billion in money from clients who own virtual currency accounts as a direct response to the fiasco involving FTX.

In tandem with the seventh increase in the target range on interest rates, the bank said that it had made the decision not to match the increase that had been implemented in December for a number of its high-cost traditional deposits, which ultimately resulted in a decline.

Additionally, traditional deposit outflows were impacted by a decline in 1031 exchange operations and seasonal outflows in the mortgage servicing industry, both of which are quite high-priced, said Signature.

During the past year, Signature has seen a reduction in deposits totaling $17.54 billion, or 16.5%. The total amount of money deposited in banks fell by $5.15 billion, excluding the $12.39 billion lost in digital asset banking due to their planned reduction in this area and the difficult cryptocurrency landscape.

With over $500 billion in deposits expected to leave financial institutions in the second and third quarters of 2022, the market for deposits is becoming more competitive, as reported by Signature.

The bank said that it has chosen to stop accepting deposits from some conventional banking sectors because those sectors always compete with each other to provide the greatest marginal pricing from banks prepared to pay the highest interest rates.