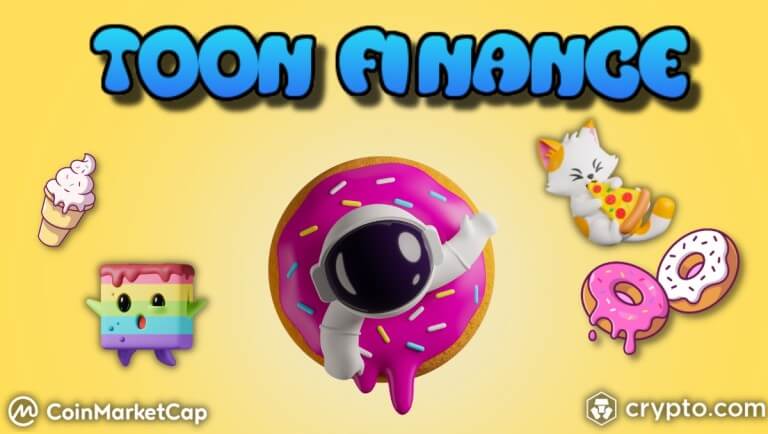 Cryptocurrencies have always remained the topic of discussions since they started getting popular, but what gains attention often has something special about it that makes it stand out. We are talking about a new cryptocurrency known as the Toon Finance coin and how it has become the biggest ICO of 2022 and the new 2023 year that is swiftly approaching.

Before diving into the details of the ICO presale, let us introduce you to the very new cryptocurrency coin that has been gaining all the popularity in recent times, as it is promoted by media channels and crypto enthusiasts.

The Toon Finance coin is a meme coin that has gained traction at prestigious platforms like Crypto.com and CoinMarketCap.com just months after being launched as it leaves behind all the other coins. Let us look at the coin and its insights in detail.

Cryptocurrencies have always been appreciated for the anonymity, easy payment system and the profit potential that they offer. The rise in popularity might have led to over saturation of crypto space by new coins being launched every now and then, but this doesn’t mean that every new coin can’t be better than the ones we have.

As the market expands, new meme coins are launched; some are well-liked, while others are mostly ignored. But the one we’re here to discuss – the Toon Finance coin  is undeniably the talk of the town. Not because of any dispute, but because of the astronomical riches that are expected.

There is significant division in the investing community around meme coins. Some see them as hidden possibilities, while others are wary of their potential benefits. But the facts speaks for itself, and it has once again stated that investors are profiting handsomely from their investments in meme currencies.

For obvious reasons, teenagers are obsessed with meme coins. Not only that, but celebrities and industry leaders ranging from Snoop Dogg to Elon Musk have been rallying for meme currencies from the beginning of the age. Indeed, Elon Musk’s Tesla just stated that it would begin taking meme currencies as payment, beginning with Dogecoin. That leaves investors with few reasons to overlook these cryptocurrency treasures.

Investors have accepted the Toon Finance coin with open arms, and it is being recommended by qualified financial experts on a daily basis due to its promising qualities.

Portfolio monitoring, increased anonymity, and maximum security due to its operation on a DEX, or Decentralized Exchange, are just a few examples. When the risk management solutions are so diverse, greater accessibility and never-ending analytics are often disregarded.

The investing world has become attracted by the meme currency following the tremendously successful stage 1 presale of toon financing. Toon Finance’s presale stage 2 was also just started, and it has already drawn a large number of first-time investors as well as current meme currency enthusiasts. It’s clear that people are obsessed with meme coins.

Toon Finance joined the market and developed a show company for itself with a comparatively cheap ICO price. The word spread at the speed of light, and astute investors seized the chance. Even those who lost out on the first round of presale were excitedly anticipating the second phase, which has already begun, as previously stated. Toon Finance has recently been called the Dexter of memecoins or the new “memecoin crusher”.

It comes as no surprise that popular culture has taken over every business. What’s trendy is what sells, whether it’s gadgets, clothing, or cryptocurrencies. People link meme coins with pleasure since they are associated with viral memes that make people giggle. And how could they betray something that had brought them joy?

In this simple cycle, the awareness and popularity of meme coins continue to rise, as does the number of investors. There are usually special discounts or some other form of advantage for those who buy early, and you’d most likely be one of them. Because it would be difficult to conceal one’s tracks if investors passed up the second presale chance.

Meme coins are also ridiculously inexpensive, thus a few dollars is all that is required to invest and benefit sooner rather than later. Toon Finance’s low-cost entrance makes it difficult for investors to swallow. It gives investors almost little incentive to wait at this point.

What makes the Toon Finance coin so special?

Toon Finance Token (TFT) is supported by exceptional blockchain technology, which attracts intellectual investors. Because Toon is founded on a DEX, investors that trust in nothing but science believe in it as well. Just because it is a cartoon-themed coin does not imply that any compromises have been made in order to make it a decentralised money.

If you are unfamiliar with the word DEX, it stands for Decentralized Exchange and refers to a digital currency exchange in which no middlemen or regulatory bodies are involved. The exchange is a peer-to-peer exchange that operates independently. Crypto traders perform deals autonomously and securely.

Because there are no centralized servers, illegal cybercriminal involvement is nearly impossible with DEX currencies. The same is true for Toon Finance. Investors may put their trust in Toon Finance without fear of being taken advantage of. Because of this, it is the most reliable meme coin.

The issue of theft has always been handled in the bitcoin market, so we wouldn’t leave it out here. No crypto trader should be subjected to any illegal attack if all they are doing is making wise investing decisions. Toon Finance has addressed this worry, and the fact that it is built on DEX testifies to its potential high security.

Anonymity is another privacy and security initiative taken by Toon. The Toon Finance protocol accompanies total anonymity so if you’re planning on buying the adorable Toon coins, you need not worry about your information leaking. That’s way behind possible. There are no KYC requirements in the DEX economy and hence, you would not be asked for providing your personal information. The information that was never shared will never be leaked.

Toon Finance is less expensive than the competition. During the first round of presale, which was quite successful, it was evident that customers were pleased with how little money they needed to put in TFT.

Because there is no centralized authority in the case of DEX, there is a significant cost reduction. This guaranteed that the launch price of this meme currency was lower than many others, despite its insane attributes.

Even after implementing a P2E platform, which necessitates a strong team of engineers, the platform remains reasonably priced. The only “middlemen cost” you must pay is for petrol, which we shall discuss at the conclusion of this page in the “How to Buy TFT Section.”

To purchase Toon Finance coins, all you need is a cryptocurrency wallet and Ethereum. Both are required to purchase any other cryptocurrency, but the procedure is significantly simpler in this case. While some individuals may choose to go through the lengthy process of submitting personal information and waiting for it to be approved, the vast majority of people are wiser.

The wise choose the simplest processes since they realize that a platform that guarantees user-friendliness will ensure that its users are pleased throughout their stay on the platform. You don’t even need to register on the Toon Finance website to invest in the meme coin.

All you have to do is wait for the presale and enter before many others to take advantage of unique rookie incentives.

Trading, exchange, and play-to-earn fights are all available on the Toon Finance platform. It is an extreme DeFi platform that allows you to easily trade NFTs, swap bitcoin, and bridge blockchains.

Toon Finance would create a one-of-a-kind metaverse for the gaming business. Various NFTs are also anticipated to be published, which might be used as investments or to play the Toon Finance-developed Space Grounds video game.

Toon Finance is also working on the Space bridge, a cross-chain bridge that is responsible for providing communication and efficient interoperability between two blockchain networks. Users will link apps, protocols, and assets. As a consequence, by utilizing Space bridge to connect BTC and ETH, you may trade Toon Finance Coins using both currencies.

Because the coin is decentralized, it is significantly less expensive because you just have to pay a tiny entrance charge to the blockchain you use, not to any intermediaries. And, because it is new, the Toon Finance Coin is presently less expensive than other meme currencies.

On October 16, Toon Finance officially launched its initial coin offering, with 50% of all coins sold in advance. One billion Toon Finance coins are now in circulation.

The inaugural ICO presale was a huge success, with over $3 million worth of TFTs sold in the first week. Investors, dealers, and media outlets from all around the world continue to demonstrate their unwavering support.

Traders, investors, gamers, and media gurus are all promoting the ICO. That alone should persuade you to purchase some TFT coins before they are all gone.

The devotion of the Toon Finance team, as well as the extremely appreciated presale idea, were critical components in this success. The first presale was a huge success, selling out fully in the first week, and the second presale is now open.

The most significant benefit of participating in the presale would be receiving fantastic discounts ranging from 10% to 30%. In addition to token discounts, early investors may be given access to certain features or invites to special events.

As an early investor, you are not only entitled to discounts or incentives, but you are also a part of the firm and may help shape its destiny. You are not only aiding, but also contributing to the success of the effort.

When you invest early, there is limited competition and hence less risk. Early adopters may get a significant return on investment (ROI).

Now that you know you can absolutely trust the Toon Finance coin, let’s speak about how to purchase Toon coins. It’s straightforward. If you buy the Toon Finance coin in presale, you will get the best deal. The first round of presale occurred on October 10th, and the currency raised $3 million in the first week. The second round of presale is now open, and here’s how you can get in on the action:

Remember that you will be charged a small blockchain transaction fee, known as a gas fee. As a result, you must determine how much gas will be paid when purchasing TFT and then purchase the appropriate quantity of ETH.