Upon report that football superstar Lionel Messi will join Paris Saint-Germain (PSG) for free after his Barcelona exit, the PSG coin began surging above $40 on August 2021. Thus we see the phenomenal interweaving of sports and crypto in the lives of football fans.

The Paris Saint – Germain Fan Token ( PSG ) is a token with robust utility that allows Paris Saint-Germain Football Club supporters (“Paris Saint – Germain “)  to have a tokenized portion of power on club operations via the Socios platform and software. The token functions as a participation key, allowing fans to contend for exotic prizes, club membership, and other benefits.

The sole certified Paris Saint – Germain Fan Coin is called $PSG. Fan Tokens are digital assets that do not expire. Consider them your regular membership, but with the added benefit of the right to vote on football club matters, unparalleled contribution to your team, and unique once-in-a-lifetime events.

Meanwhile, PSG LGD is one of the favorites for the biggest esport tournament started today (International 10 – Dota2); winners will share 18 million $ between 5 players; it’s trendy in China, so it has excellent visibility for the PSG team.

What’s the PSG coin for?

Paris Saint – Germain uses the Socios.com Software to allow Fan Token owners to weigh in on official club matters. It is up to the football club to conduct polls, but the choice made by supporters is final. Other teams’ fan token holders have previously voted on various issues, including uniform designs, vehicle designs, the official team slogan, and as the starting players.

Fan Tokens, like their love for the football club, could last forever. Once you’ve obtained them, you may use them as many times as you like. You keep all of your $PSG Fan Tokens after several votes and fan rewards. There is no need to re-subscribe on a weekly, monthly, or annual basis.

PSG coin is a utility token-operated on the Chiliz Chain, an Ethereum – based Proof – of -Authority sidechain, and it’s primarily used for the following :

PSG coin holders may vote in different “fan decision” polls issued by Paris Saint -Germain through a smart contract. Paris Saint – Germain is legally obligated to act under poll findings. Token holders may engage with the Socios platform ( vote in polls, compete in competitions and quizzes, connect/meet like-minded people, and so on ) and receive incentives such as :

Holders of $ PSG Fan Tokens holders would enjoy VIP access to domestic clubs, cups, and Continental games like European League. But that’s only the beginning. The sky is perhaps the limit, whether it comes to autographed memorabilia, witnessing a game with your favorite club icon, or traveling with the squad to an away game. On the Socios.com platform, one point worth noting is that; you may earn Fans Rewards by taking quizzes, playing games, and voting on club decisions.

PSG may be staked in the future to receive Non – Fungible Token ( NFT ) payouts. Token owners may utilize the Socios system to vote, take part  in competitions, chat with other fans, and receive incentives such as :

• Solution: Using the PSG coin to get VIP products and services.

PSG possesses a supply of 20,000 000 tokens, of which approximately 1,288,396 have been given to club supporters via a Fan Tokens  Offering. The leftover tokens belong to Paris Saint – Germain and could be obtained by engaging in community events and the Binance Launchpool or buying on exchange platforms.

• Constant social media engagement with the audience to foster investment.

• Publication of stories on the PSG coin in primary media sources.

• Incorporating PSG into the club’s official apps and websites.

• Making use of Paris Saint – Germain stars to advertise the PSG token.

Those tokens are typically available via a specific portal — Socios.com — on their blockchain known as Chiliz. PSG coin was one of the platform’s early tokens, with over 50 fan tokens listed by August 2021. The club’s executives inked a multi-year agreement with Socios.com, indicating that PSG’s crypto participation would most likely continue for some time.

PSG tokens, like other cryptocurrencies, may be purchased on major exchanges, but they can also be obtained via methods specific to the fan token initiatives on Socios.com. Fans may find the tokens by playing games in the platform’s app, or they can earn them as incentives for engaging with their team. These mechanisms encourage fan interaction and inject some fun into tokenomics.

The first significant increase in PSG price occurred in December 2020, after its Binance debut, when it surged from $10 to about $30, but it quickly reverted to the prior level. It began to rise in the first half of 2021, following the entire crypto market trend. The PSG token price prediction at that time could be achieved by reading a typical head-and-shoulders structure on the chart: after passing through the second “shoulder” in May, the token’s price dipped down to $12–$16.

The tide changed in the late summer of 2021, when rumors of Lionel Messi’s impending move to Paris Saint-Germain football club broke, including the revelation that a portion of his signing-on fee would be paid in PSG tokens. This was enough to cause the PSG’s Price to skyrocket, hitting an all-time high of $61 on the 10th of August, making the PSG token a genuine competitor in the crypto world, as the token is currently ranked #318 in market cap. PSG Fan Token is presently highly volatile; thus, PSG price forecasts remain in the air for the time being.

One hundred percent correct analysis for the PSG coin (judging from historical data) is not possible. You can check the real-time aggregated PSG buy-and-sell rating for the token’s projected value using the sophisticated forecast system TradingView. The synopsis for PSG/USD is dependent on the most often used technical indicators, which are Moving Averages, Oscillators, and Pivots. 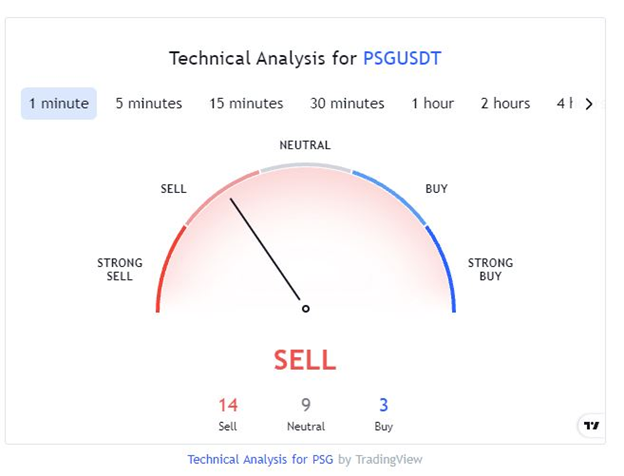 According to price forecasts and technical analysis, the Price of a Paris Saint-Germain Fan Token is expected to drop to $53.05 in 2023. Depending on the market, the PSG token price may go as high as $65.04 and as low as $54.59.

There is no unanimous agreement on whether future PSG price fluctuations will be positive or negative. Indeed, potential future development is dependent on a variety of variables, including announcements, new technical solutions developed by the Paris Saint-Germain Fan Token initiatives, the crypto ecosystem in general, legal status, and so on.

Although the Paris Saint-Germain Fan Token has long-term earning potential in the crypto industry and can soar to new heights and surpass its highest price, other deals are being made.

The deal will see crypto.com use its native token CRO to pay a significant portion of the sponsorship fee. It is worthy of mention that CRO is among the top 40 tokens globally, with a market capitalization of around $4.5 billion.

The exchange firm stated that partnering with PSG is natural as the club recently built “one of the strongest football teams in the history of the sport,” with the latest addition to the club being Argentine icon Lionel Messi. As the PSG team is crucial to every fan, we are hopeful that cryptocurrency will be integrated into daily life.

We want to remind you that it is crucial to do your research before investing in crypto or making an investment decision.

How many votes can I cast?

You can vote just once for each poll. However, your vote’s value We want to remind you that it is crucial to research before investing in crypto or making an investment decision. It is determined by the amount of Fan Tokens you possess. For instance, if you own ten Fan Tokens, your vote will be counted as ten. Each vote is limited to a certain amount of Fan Tokens set by the PSG club.

How much $PSG Fan Tokens am I going to need?

With only one PSG Fan Coin, you may impact the team and participate in Fan Rewards. Some

special prizes, on the other hand, may demand more than one entry.

What currency should I use to get $PSG?

Using CHZ, the in-app money, you may buy PSG Fan Tokens straight from the Socios.com platform. When you go on vacation, think of $CHZ as a foreign currency. You first purchase $CHZ, then exchange these for $PSG Fan Tokens. You may buy $CHZ using a payment card(Debit/credit).

What price will the Paris Saint-Germain fan token reach?

The Fan token price in the French Premier League may increase to $35.52 by August. The currency is expected to break over the $87.90 area easily.

What will the Paris Saint-Germain fan token be worth in 2022?

What is the PSG token highest projected price for 2021?

Will the Price of Paris Saint-Fan Germain’s Token rise?

Can the Paris Saint-Germain fan token be destroyed?

According to our findings, it is unlikely to occur, but fans can change their minds in a volatile world, and the whole system collapses without a community supporting it.

What is the cost of a Paris Saint-Germain fan token?

Paris St-Germain Fan Tokens are presently priced at USD 27.41 on the chart. The coin’s pricing was $27.413. Tokens may be bought at the start of the day in Paris.

Is it worthwhile to buy a PSG fan token?

Yes, the long-term revenue potential in the United States remains extremely strong (see chart above). For a year, you may obtain 80.03 percent of your earnings. You may potentially make more than 80% of your profits.

Can the PSG fan token displace, outperform, or exceed other coins like BTC?

Such a shift, according to our projections, is improbable. CNN.com. believes this is improbable considering the fan base is not worldwide.