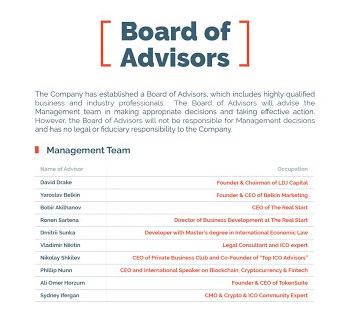 Unlawful Use of Name

Late June 2018, the complexity of a pernicious case of identity theft came to my attention on reading a complaint sounded off by Yaroslav Belkin, CEO of Belkin Marketing, ex-CMO of NewsBTC Media Group, Head of Marketing at Cointelegraph Events, and an expert at ICOBench. The complaint stems from the use of his name as ADVISOR in the MOBU ICO Whitepaper and the MOBU ICO website, without his due knowledge and permission. In effect, this is blatant theft of a man’s name, identity and reputation attached to the name. 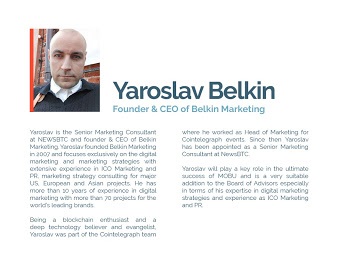 Then, I had communicated with Mr. Belkin on the scathing complaint he had posted on the review of the MOBU ICO, which was already taken down by ICO Bench. He had given MOBU ratings of 1 1 1 and gave warnings about a particular man and the MOBU ICO. This is a transcript of Mr. Belkin’s narrative during our call:

“Fall of 2017, Juan Engelbrecht, then CEO of Zabercoin, asked for my help on marketing his endeavor. He acted professionally and provided the budget to get me to work on the content for the Zabercoin project. Later, I noticed irregularities on the same, among which are they lacked an MVP and also a professional team – so we have professional managers without anything to manage. There were also bad words from the community about other dealings of the same person. So, I confronted him on these matters and asked for clarification. Engelbrecht promised to rectify matters and but never came up with any change or explanation for certain irregularities I’ve asked to rectify. So, I told him, I’m out of Zabercoin.

February 2018, as my team came up among the top 20 in ICO Marketing., Juan Engelbrecht reached out and basically admitted his mistakes for Zabercoin and wanted to start everything from the beginning. He mentioned he has a project and asked me to be his head advisor. He said he had no budget as of then because somebody owed him a lot of money and he was waiting for them to pay him back soon, but he had an amazing idea. Later, he would keep saying that the payment should arrive any day now over the course of 3 months, yet it would not stop him from flying all over the world living the high life and even inviting me to join him. The project sounded promising and  reasonable and we talked about MOBU, spending countless hours over the phone discussing the name, the logo, etc, and so, I have advised him and helped him as he had me excited and professionally interested.

Politely, I asked him to put our agreement regarding compensation for my work and regulation of the project, but Juan just kept on postponing it, calling me “brother” and asking me not to worry.. He kept on postponing any kind of budgeting or payment for my work, too. Meantime, he used me to get first-hand information on all matters pertaining to launching ICOs, including actual terms and conditions, particulars about collections, names, pre-ICOs, main ICOs, legislation, to name a few. Juan Engelbrecht had said that he has learned his mistakes when doing Zabercoin ICO and he will not repeat the same mistakes but reneged on this promise.

Finally, I confronted him with the same facts I noticed with Zabercoin – no MVP, lack of a professional technical team, etc. Time went by and still, the same mistakes were repeated, exposing pure lack of intention to launch a project professionally.  – the lack of compensation for my work turned out to only be the least of my concerns.

Having learned this fact, I had confronted Juan on the matter of misusing my name for his purposes, not submitting to my directions on the matter of certain irregularities being repeated in MOBU from Zabercoin, and defaulting on the payment of his obligations for my work on the project. He grew belligerent and became a totally different person and spoke unprofessionally and abusive which had me upset and worried me, to the point that I decided to make public this matter concerning Juan Engelbrecht and MOBU, for my protection and that of others who might be defrauded. 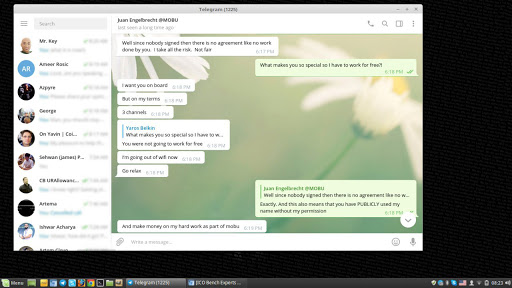 The first three screenshots show the proof that Yaroslav’s identity was being used by MOBU. When Yaroslav later wrote a comprehensive review with all clear pointers, this is what happened:

So here is the question. Where would so many users came out all of a sudden to negative thumbs down this while all other reviews out there or reviews in any other ICOs only have natural 1-3 thumbs up and down?

Obviously, one of the above or both.

This does not end here. What is the relationship between Amazix and  ICOBench? Does ICOBench influence everything on the platform working together with Amazix? If not, why would the first review that was written by Yaroslav disappear in no time?

After looking further into this matter, this is my personal statement on this matter of Belkin versus Engelbrecht, not actually versus MOBU, as I know some of those who have joined his team may have been misled by the misrepresentation that I am the head advisor. I exhort those who may not have known the truth about a flawed MOBU and the character of this person they are now engaging with to reconsider their involvement – Are Juan Engelbrecht and MOBU worth your trust and investment?”

Millions of dollars within a few hours

The problem with ICOs, more than the lack of regulation, is the lack of company valuations and evaluation. I have known small teams with only two or three founders being able to raise millions of dollars worth of cryptocurrencies within a few hours without showing any prototype, real product, market validation, great team, or knowledge.

The whole concept of an ICO is put down on a whitepaper – a technical scientific paper describing the underlying technology of the product. It gives the business plan or business model canvas for crypto startups. Being highly technical, a whitepaper is hardly understood by investors or speculators. The ICO raters are tasked with giving the appropriate ratings that will “certify the trustworthiness of the ICO” for an investment, although the rating comes with the remark “do your own due diligence”. Of course, ICOs with reputable advisors gain public trust and greater investment.

Be Vigilant Against Scams

It’s not a farfetched idea that a hacker who understands cryptography and the blockchain technology perfectly can raise several millions of dollars with their ICO, but it doesn’t mean that his company will succeed. One rueful comment by an ICO watcher, “The lack of leadership qualities, the lack of a talented team, and an overall lack of product-market-fit will burn every satoshi of even the highest ICO.” Or it may just be an unscrupulous businessman who rides on the good name of another expert to get what he wants, no matter the consequences or aftermath of the ICO project.

Juan has been “globetrotting” when requested for payment, reneging on his promise to recompense Mr. Belkin for his valuable time. There was one event we were aware of where Mr. Engelbrecht hied off to the Formula One Grand Prix in Monaco which easily costs $10k- $15k in travel expenses alone and even invited Mr. Belkin. We know this to be true as he even boasted of such junket in his ICOBench comments. How easy would it be to send the same amount as payment to Mr. Belkin for services delivered in full trust?

“Treat others how you want to be treated” is the golden rule of every connection between two and more parties. Unfortunately, Juan Engelbrecht does not consider implementing this rule in his life.

Here we have some of the screenshots of conversations between Yaroslav and Juan. 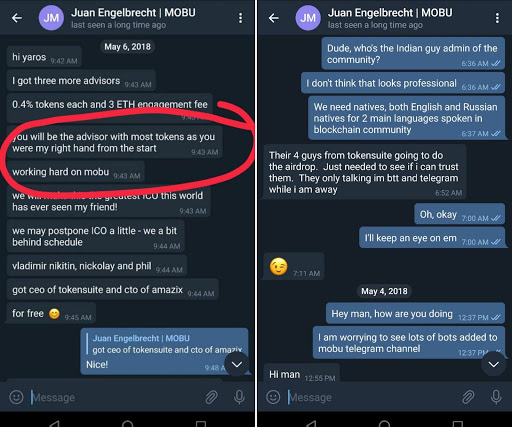 Here you see how smoothly their relationship takes up, and how Juan is satisfied with Yaros’s tireless work. Their chat continues with compliments from Juan towards Yaroslav, stating that Yaroslav is working hard on MOBU. Remember these words because we’ll have to discuss the issue where Juan forgets about every word he said and every job Yaroslav has done. 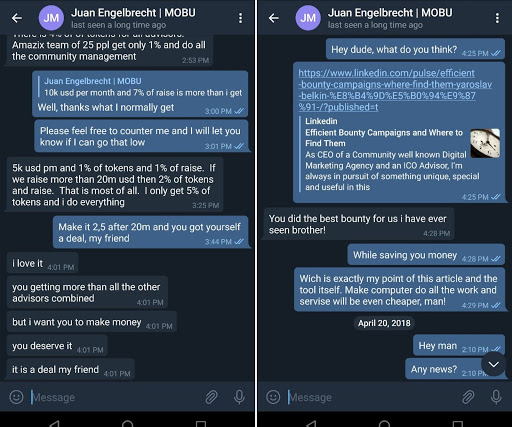 Seems like a normal healthy professional-friendly relationship, doesn’t it? 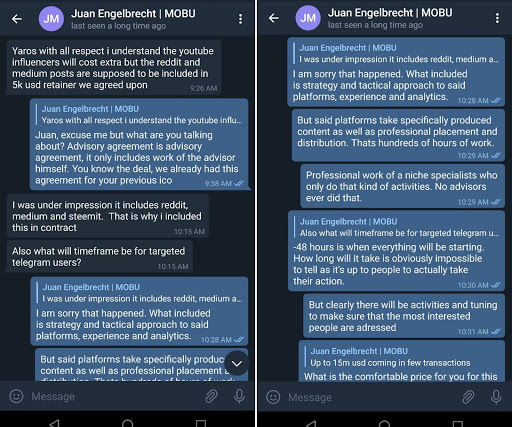 It seems like we have encountered the issue in these screenshots.

There are men without scruples in crypto space and we must be careful to sort them out or they will spoil the blockchain and crypto communities just by association with their names, and reputation. Men who would misuse another man’s name to bolster their credibility in total disregard of besmirching his reputation are a primary cause for concern and punitive action.

Take a look at the two pages of the MOBU Whitepaper where Yaroslav Belkin is named as Advisor (pp 31 and 33) from the ICOBench rating site and the MOBU site itself. Also reproduced is the MOBU ICO poster which shows Yaroslav Belkin among the Advisors.

Note: They are removed currently after this matter has drawn public attention

Mr. Belkin had no publication notification for the final MOBU documents and did not have the opportunity to clear all the contents of the Whitepaper and other matters pertaining to the ICO and his name. Belkin said, “I did give my verbal and potential permission on using my brand on the website AFTER the agreement was signed because it is the only professional way to collaborate for any serious project. What he did was, in fact, fooling me into this permission and later failing to deliver the compensation and agreement.” 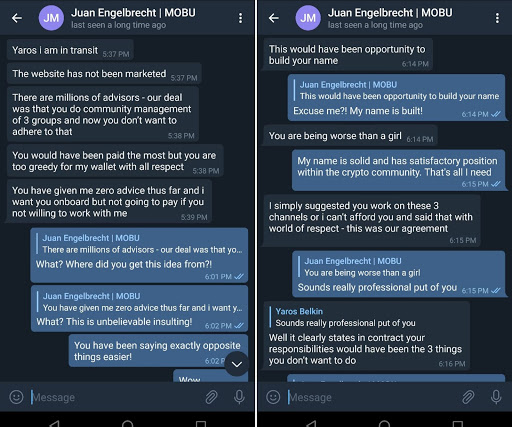 Juan starts insulting Yaroslav and disregarding every single word he said before. Moreover, he describes his behaviour as “worse than a girl” – in an extremely unprofessional way, further insulting Yaroslav, person who has been advising him for months without pay. 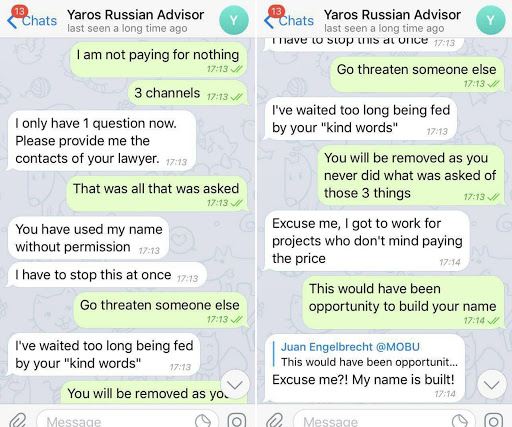 Juan also shared some of the screenshots, stating that Yarsolav was being unprofessional and childish. Although we can all agree that Yaroslav took this matter more professionally.

Of course, there’s more to come, but it’s just a small portion of the relationship between Juan and Yaroslav, building up to the identity theft issue.

Buyers of ICO tokens—whether they are investors seeking to profit or technology users seeking to support and participate in an innovative product— would expect some disclosures in order to make a purchase in an informed manner. These disclosures, some of which entrepreneurs themselves have identified, are especially relevant as ICOs transition from technical expert ecosystems to the distribution of instruments that are ever more likely to attract everyday investors and the retail public.

If you are in a similar situation and you do not report this case of “identity theft”, there will be no police report and no investigation. If you want the protection of the law as a victim of identity theft (and all the benefits you gain as a recognized identity theft victim), you must make a report. To get the protection of federal and state laws, you must have a police report. You are not an accomplice or co-conspirator unless you knew about the fraud for a while and did nothing to stop it or if you participated in the fraud yourself. If you refuse to make a report, you may risk appearing suspect when you try to clear the fraud activity (civil or criminal).

My final take on this MOBU exposé: Would you want to trust this man and this project with your money, if he treats respected people like this?

8 mins read
MiamiCoin and NewYorkCoin plummet over 85% despite Mayoral endorsements
17 May, 2022

8 mins read
Leading Korean law firm to sue Do Kwon amid UST and LUNA ordeal
18 May, 2022