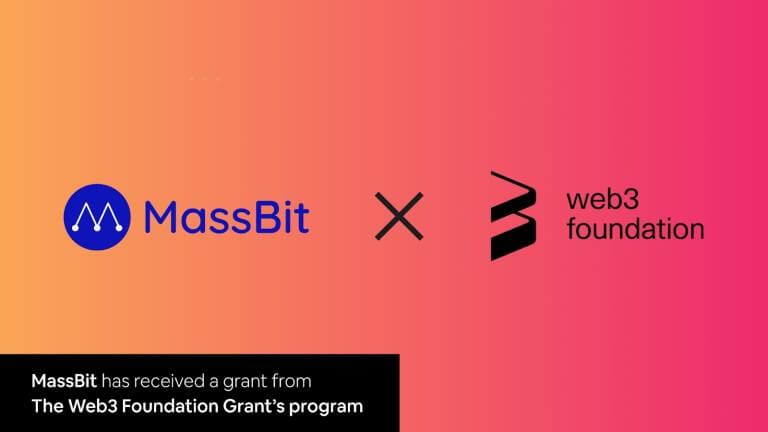 SAN FRANCISCO, California – Today MassBit, a global decentralized API service for decentralized apps, has been awarded a grant from the prestigious Web3 Foundation Grant’s program. The MassBit team was able to secure a grant for Milestone 1 with a grant amount of $35,000, which the team has said will be used to accelerate product development leading up to mainnet.

The Web3 Foundation provides grants for projects believed to have the highest impact on the Web3 ecosystem, including Polkadot, the foundation’s flagship protocol. Polkadot creates secure and scalable ecosystems where multiple parachains can interact with each other.

“The focus now is on optimizing and improving the efficiency of core functionalities,” stated Minh Doan, MassBit CEO. “The grant will also help us further support the Polkadot ecosystem, utilizing the security, scalability, and decentralization of Polkadot to show what projects can expect when using MassBit Route as their project’s infrastructure and cross-chain indexing service.” MassBit Route is now supporting traffic routing to ETH and DOT blockchain nodes.

The Web3 foundation is one of the largest and most respected foundations supporting the development of Web3 technologies. To date, they have accepted over 400 total projects with over 1050 applications received. The work and product development shown by the MassBit team made them just the 300th application to both be accepted and complete Milestone 1.

MassBit Route is a decentralized network of nodes and gateways that route DApp requests to low latency blockchain nodes, built on a substrate framework. Node providers stake and earn MassBit token for servicing the blockchain distribution network (BDN) and consumers pay in token for global access to decentralized blockchain APIs.

“Our next goal is to expand the network, to increase overall stability, while balancing the token distribution mechanic to create the most fair system possible,” stated Doan. The team has stated they will now begin work on Milestone 2, looking to complete the project, something only a quarter of all Web3 Foundation applicants have achieved.