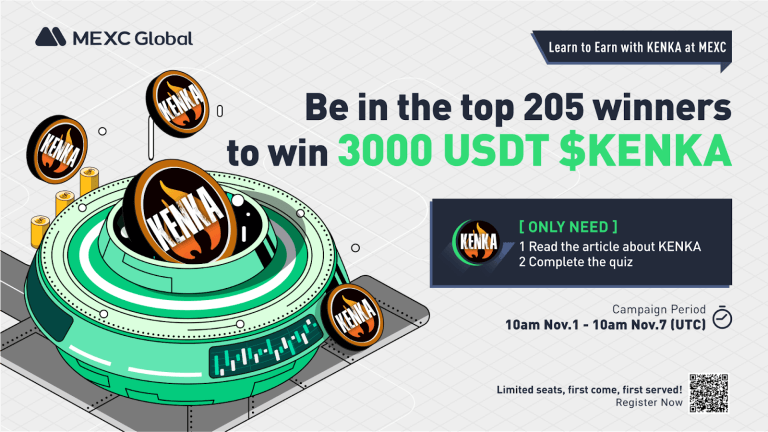 KENKA METAVERSE will be listed on MEXC Global on November 1,12:00 (UTC), users are able to trade its native token KENKA (KENKA/USDT).

KENKA METAVERSE is a blockchain game derived from a hit app game called KENKADO, recorded over 3 million downloads, and reskinned with new characters and new setting. The game is designed as a “Play to Earn” ecosystem, where players train their characters and win the fights to acquire “brothers”, referring to gang members, honor, gold (tokens), and much more.

The core features include single play,main character,Shatei and Shima.In this game, squad members and allies are called the Shatei. Shatei can help users in many ways by training in the gym, running and protecting the “Shima”.The land in this game is called the “Shima” and there are various roles,including gym,arena,bettings and market.Land, brothers, and other items in the game are in NFT and are tradable in the market. By bringing these items together and forming guilds with other players and cooperating, players can participate in a stronger community than in traditional games.

KENKA METAVERSE categorizes users into four types according to how they play: Guild Masters and Players are the “Entertainers” and Follower and Gamers are the “Enthusiasts”. Users who contribute to the game by entertaining other players can earn tokens. Players who simply enjoy the game can make regular in-app purchases, or any disbursement with any other points.

Asuka Kirara and KENKA are currently under contract and issued NFT. The second NFT will also be issued soon.Besides, MIKURU ASAKURA , the Japanese professional fighter and is currently signed to be Kenka’s ambassador.

The dev team behind is a Japanese team who have worked on massive hit games such as Attack on Titan. The current character designs and backgrounds (world view images) are by Atsushi Okada, a manga artist.The parent company of the dev team is a well-known listed Japanese company，SNS-ENTERTAINMENT. The team has members with extensive connections in the Japanese anime and music industries, so Kenka will be able to collaborate on projects that utilize many IPs.

According to public information,MEXC is one of the world’s Top 10 cryptocurrency trading platform. The core products include spot trading, leveraged ETF, futures, NFT Index, etc. MEXC supports more than 1,500 cryptocurrency transactions, and ranks first in terms of liquidity for Top 50 cryptocurrencies.