Amidst all stablecoins that continue to enjoy a significant spike in their market capitalization, owing to the recent Tether-Bitfinex controversy, Gemini Dollar, witnesses a steep plunge of eighty eight percent (88%).

Gemini Dollar (GUSD), a blockchain-based USD stablecoin founded by the famous Zuckerberg rivals – The Winklevoss twins, received its fair share of hype since its launch. Unfortunately, the recent seven months have not been one of its proudest moments.

The following market analysis for stablecoins demonstrates a significant decline in the GUSD’s market cap. From over one hundred and three million dollars ($103.91 million) in December, its value has taken a downturn since then and reached just over twelve million dollars ($12.35 million).

Chainlink price strong against Bitcoin above $2 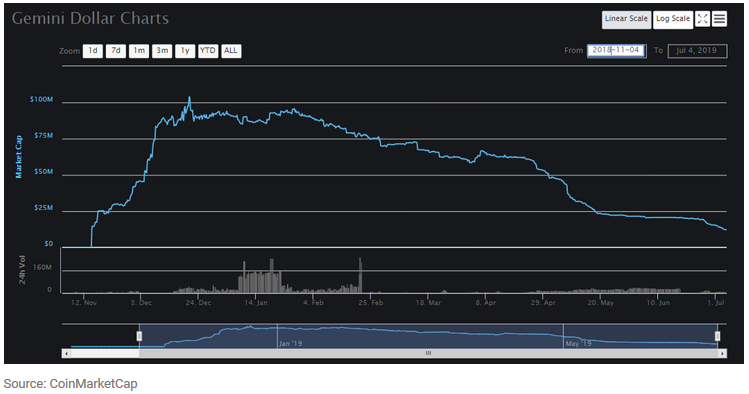 The catastrophic decline in its pricing has sparked many theories on what went wrong for the stablecoin that once boasted of a notable lead in the stablecoins market in 2018.

Experts claim that it all started with Facebook’s entry into the crypto markets with Libra – a stablecoin that has received extravagant publicity since its launch news. Some traders believe that Libra may able to pull off higher liquidity through tokens used for trading true cryptocurrencies.

Other stablecoins show an upward trajectory

GUSD lost most much of its fanfare since January 2019 and has struggled to cope up since then. On the contrary, other currencies like Tether and Paxos Standard have been functioning well.

The chart below shows a commendable performance from Tether despite its much-talked-about battle with Bitfinex over disputable amounts of cash reserves.

On the other hand, Paxos Standard, a digital dollar designed by Paxos Trust Company, certainly managed to hold its ground. By minting ten million stablecoins moments after the release of Tether-Bitfinex news, the cryptocurrency has given a consistent performance throughout the year.

It is not certain whether Libra is the only contributing factor to GUSD’s collapse as the repercussions are likely to be observed on the entire stablecoins market and not just on GUSD. That being the case, unless the crypto exchange platform Gemini comes up with an innovation that works in its favor, GUSD’s fight for survival is expected to continue.