CoinSwap is one of the many exchanges that offer decentralized exchanges of funds; CoinSwap also supports Bitcoin and other cryptocurrencies. CoinSwap is a decentralized protocol that allows cryptocurrency traders to trade with other traders without interference from third parties or mediators. The only ones involved in the trade are the buyers and the sellers. This, in turn, defines the robust privacy protocol of CoinSwap, which removes all obstacles between the two trading parties making it exclusive only to them. Third-party interference primarily results in giving away extra commissions and miscommunication.

Based on AMM, nodes join DeCloud to provide liquidity and build ecology. CoinSwap has established an exemplary security network that provides users with impregnable security walls and a near-perfect privacy setting. If the program idea were implemented on a larger scale, it would help many businesses thrive. However, the risk of complete anonymity is a threat to governments all around the globe, and most won’t allow the CoinSwap protocol to thrive; most governments haven’t even legalized cryptocurrency yet. However, that being said, we can’t deny that the CoinSwap protocol is the future of bank security and safe transactions.

The main objective of the CoinSwap protocol is to enhance the security, privacy, and anonymity significantly in between the transaction conducted on a particular blockchain through this exchange. The services provided by this network have proven to be efficient for their clients and their preferred cryptocurrency. The CoinSwap platform can create new pools giving its users the advantage of the best slippage, swapping rate, and price impact available on any other platform. As the program is an automated market maker (AMM), it can facilitate its clients better than other platforms.

Greg Maxwell developed CoinSwap cryptocurrency exchange based on massive privacy and security; the idea bloomed in 2013 when Greg Maxwell, a renowned developer of cryptographic systems, streams, and coding in the world of free software, recognized the Bitcoin Developer. To create a design for Bitcoin trading without altering its protocol, Maxwell developed a system, taking inspiration of peer-to-peer trading for everywhere he could, and developed a secure, non-custodial, and highly private exchange system, now known as Coinswap.

As a result of Greg Maxwell’s efforts, a system was created where the private, peer-to-peer exchange was possible even between different cryptocurrencies. However, the system he devised still doesn’t have a practical working implementation due to the intense complexity of the system.

Although the idea holds great promise, until and unless its complexity is reduced, it will not be implemented on a large scale, which could help solve many current exchanges’ problems. However, Coinswap quickly takes the cake compared to other platforms since it was the first decentralized exchange protocol, which could signify that it set the basis of every other DEX.

However, the idea of being good doesn’t mean that it will consistently be implemented; although the concept looks good theoretically, it could potentially overcomplicate the current system, and people might not be ready for that. Just because of its overcomplexity, many businesses might tumble, crash, and burn because of its overcomplexity. Although, if we only look on the bright side, the idea has many benefits that can potentially lead to a new technology of the future. As human beings, privacy is our fundamental right, and Coinswap has enabled us the opportunity of ultimate privacy. However, this much privacy comes with risks that some people will exploit, and the world could fall into ruin, not to be dramatic, but it is a possibility.

How does CoinSwap work?

CoinSwap is the first DEX globally that uses the platform token COINS to pay for transaction fees. The COINS used to pay for the fees will be burned as part of a deflationary tokenomic model. CoinSwap works by performing cryptocurrency trade operations between two users who want to exchange them within their blockchains. CoinSwap uses several 2-of-2 multi-signature schemes to conduct these operations, something most of the other exchanges lack.

This means that involved exchange parties have to sign cryptographically for it to happen. Once this is done, it’s all smooth sailing from there; no one can hack or cheat the transactions due to the intense security of the protocol.

Additionally, during the transaction process, Coinswap allows two users to exchange their cryptocurrency without a mediator or a third party establishing a relationship between the parties involved in the transaction. However, the best thing about this is that all the processes occur without altering or disturbing the Bitcoin protocol already in place.

For example, two people can exchange their cryptocurrency for Coinswap. The first person wants to combine 10 Bitcoin, and the other person wants to incorporate the same in Bitcoin again. When both of them use Coinswap for their trades, they will both create multiple-signature 2-of-2 addresses in which the funds used in the transaction will be organized.

CoinSwap works by linking your wallet or creating a brand new account by agreeing to the terms and conditions. It’s only a few steps that are too complicated, registering yourself on Coinswap and starting trading. You can also search at CoinMarketCap for Coinswap space, and it will give you a whole list of websites and places from where you can buy CoinSwap and give you the currencies you can buy the platform.

An essential point in CoinSwap operations is provided by the multi-signature addresses created by the parties involved in the trade. Two things depend on these addresses: 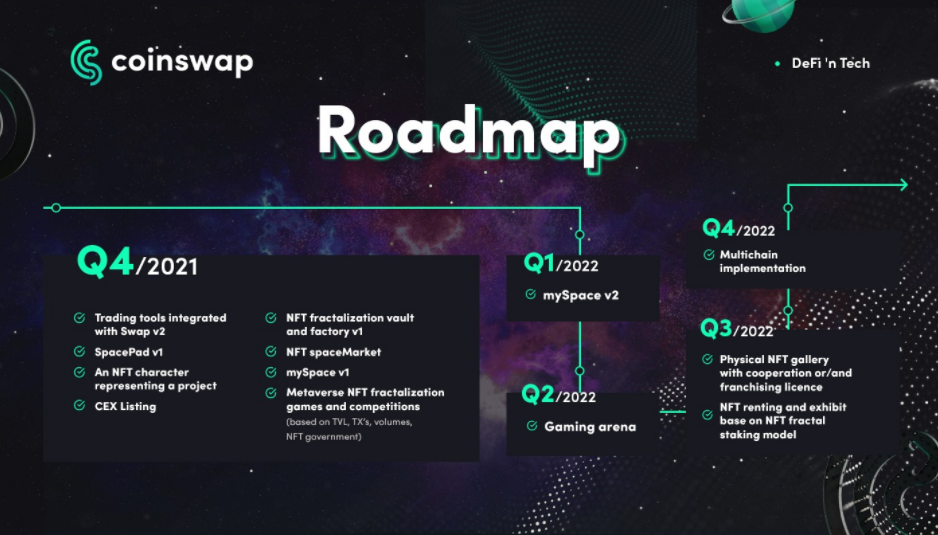 ECDSA also allows the multi-signature addresses to look like P2PKH addresses (starting with 1), making the system more complex to hack or steal from. As most of the Bitcoin addresses are in this format, it increases its complexity to a significant degree.

ECDSA-2P allows the usage of threshold signatures having two parts, which can be closely related to the Shamir of secrets (SSS) system. This protocol has powerful features as well. The signatures are substantiated by using their original algorithm without modifications to the ECDSA signature due to their validity and identical status to the ECDSA-2P signature.

This feature allows CoinSwap multi-signature addresses to be distinctive: they can go effectively to any address and any party it is sent to, without even hinting at their creators. These signatures can be considered perfectly private.

The plan of market liquidity is quite simple and has loads of advantages. The idea is to create a liquidity market for CoinSwap, which will result in quicker and more efficient trades without having the two parties pre-agree on something. This, in turn, will add more excellent usability, privacy, and security to the services that the platform previously established.

Liquidity involves the transaction between the price of a commodity and the degree to which it can be sold. In a liquidity market, trading is soft: one can sell quickly without accepting a meager price. However, when we compare it to the illiquid market, the assets price must be discounted before the selling process can begin.

Other exchanges do not offer a liquidity market, so we can assume that CoinSwap exchange is exclusive to this feature.

CoinSwap DEX was designed for high-level security and privacy during trading, and it was created to complete anonymity between transactions. As a result, the CoinSwap protocol’s ultimate goal was unparalleled privacy; the creators of this program have given us the ability to make use of the following features:

Coinswap allows us ultimate privacy; keeping this in mind, no one can correlate the transactions made to anyone. When a transaction is carried out, it happens in multiple operations, not just one. In this way, the transactions are secured from malicious intent and cannot be embezzled whatsoever, guaranteeing our privacy.

Since the protocol is entirely decentralized, only the parties involved will be able to perform the transactions and get details about it; no third party will interfere unless the parties deem it appropriate.

This is regarded as the most significant feature of the Coinbase protocol, and this feature allows users to create their trading system without code within the Coinswap ecosystem. Building a domain name without code is no big deal for the ability that Coinswap provides.

Users have the support of the CoinSwap team as they build their ecosystem within it sharing the depth of the system and earning rewards while doing it. The prizes include commissions, coin mining rewards with much more.

Coinswap is an AMM- based protocol that gives priority to the anonymity of the transactions attempted. Ensuring that the exchange is utilized to its full potential, offering meager slippage and slight chances of impermanence. In addition, Coinswap supports cross-coin trade, including many trading strategies giving priority to liquidity mining and trade mining mechanisms.

Coinswap offers referral rewards to each user. The program gives you a commission every time you refer Coinswap to your friends to utilize Coinswaps’ unusual solutions.

This way, the Coinswap ecosystem expands every time new users join, and the users that send the invites are rewarded with commissions via Coinswap’s native $COINS token.

Coinswap offers rewards to users who utilize the program entirely. For example, if someone uses Coinswap features like trading, liquidity marketing, single token mining, liquidity migration, and all the other features, that user will be rewarded mining rewards and obtain $COINS.

Users can customize their wallets to their liking; the features like DEX, NFT and DAO, etc., can be integrated into a single stop in the DeFi to make it more convenient for the users.

The Coinswap DApp allows you to do what you please with several features for multitasking and providing you with every kind of aid you can imagine. The facilities given to the user the Coinswap are what make it one of the best platforms for trading.

CoinSwap advanced trading solution provides users with the best experience, ensuring that they see the depth of the market in real-time while trading for the first time on the DEX.

PROS and CONS of Coinswap

Coinswap provides its users with many advantages that might be considered too complex for others, but we shall discuss both of them regardless.

Coinswap also has a negative side, which we will discuss now:

What is CoinSwap space?

Coinswap Space is a decentralized exchange platform formed on the Binance bright chain to make transactions as private as possible for its users. The exchange uses AMM models where users trade in liquidity pools filled with the users’ funds.

LocalCoin Swap provides its users with authentic cryptocurrencys’ to buy/sell on a local and an international level. Yes, LocalCoinSwap is a legit marketplace for crypto traders to conduct their business and participate in its community.

How do I buy CoinSwap space?

Where is Coinswap prohibited?

It is prohibited to access or use our services if you are located, incorporated, or otherwise established in, or a citizen or resident of or been a citizen of the U.S., Quebec(Canada), Singapore, Cuba, Crimea, Sevastopol, Iran, Syria, North Korea, Sudan, and Mainland China. Using a virtual private network (e.g., a VPN) to use our services as a restricted person from a restricted territory is prohibited.

10 mins read
Polkadot price analysis: DOT price will break above the closest resistance level found at $ 9 over the weekend
25 June, 2022